Chewbacca Mom gets a few big surprises from James Corden 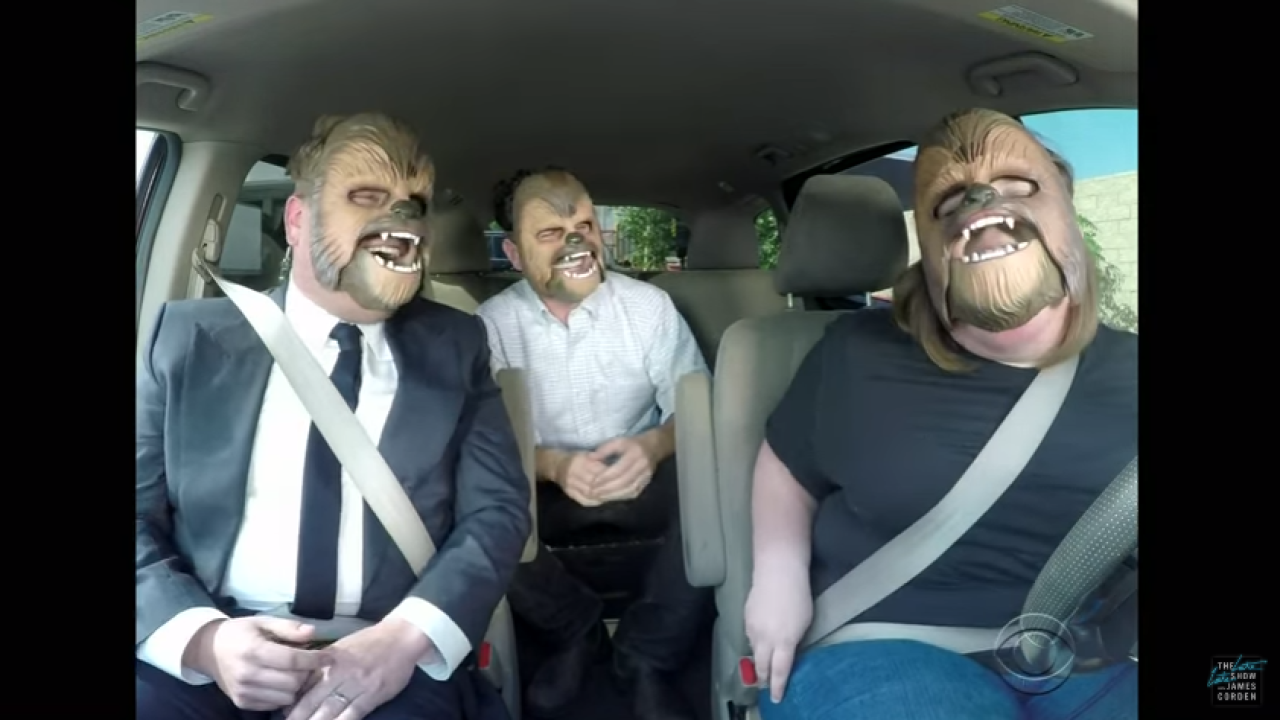 Candace Payne, the woman who went viral and broke records when she showed off her new Chewbacca mask in a Facebook video, made an appearance on the Late Late Show with James Corden on Monday night.

In a segment called “Chewbacca Mom Takes James Corden to Work,” Payne shows Corden just how funny that mask can be… with some help from a special guest.

Later in the show, Corden spoke to Payne about her viral success and even shared a note and special surprise with her from a fan — the original Chewbacca, Peter Mayhew.

More than 100 million people have watched a woman crack up in a Chewbacca mask. In her car! Just hanging out outside of a Kohl’s!

It is the most simple thing ever, yet it’s snowballed into Facebook Live’s most-watched video ever.

Despite how ridiculous it seems, Candance Payne’s legendary debut is not an indictment of our culture of social virality. Rather, it’s a profoundly simple reminder of what, deep in our hearts, we already know: joy is contagious. Laughter is good for us. A smile on someone else’s face is as good as one on our own.

These organic moments of unfettered mirth, surprise, or happiness are much more available to us now that every phone has a camera and millions of strangers’ lives are just a video click and tap away.

The early days of viral joy

Think back to the first time you saw, secondhand, a moment of true joy. Not shock or amusement, or something funny that made you laugh — Someone else’s real happiness.

For a lot of YouTube natives, one of those first moments was Susan Boyle. The unassuming lady in pantyhose and a church dress captivated “Britain’s Got Talent” in 2009 with her powerful voice.

The video is an onion of happiness. There’s the judges and the audience; amazed, pleased, and moved. Then there’s Boyle, whose own joy unfolds as, through cheers and gasps, she’s realizes she’s nailed it.

The original video of her debut has 191 million views on YouTube, and Boyle obviously became a household name.

If you want to get stuck in a rabbit hole of laughter and tears, look no further than the scores of military homecoming videos that rack up thousands upon thousands of views. There’s a reason they are irresistible: Their innate happiness transcends time, distance, and familiarity.

It’s a phenomenon backed by science. Dacher Keltner, a professor of psychology at UC Berkeley who served as a scientific consultant on Pixar’s film “Inside Out,” says emotions are super easy to access even if they’re not your own.

“Viral virtues such as joy spread to others through the empathy network in our frontal lobes, activated by perceptions of others’ emotional expressions,” he wrote for CNN.

This girl’s sweet reaction to her father’s surprise is one of the most-watched military homecoming videos on YouTube.

Add in a pet, and the joy potential skyrockets — such as this dog freaking out about his owner’s return from overseas.

It’s a double rainbow all the way! If you’ve been on the Internet at all in the last six years, you may have read that line in the voice of Paul “Bear” Vasquez, the star of the iconic “double rainbow” video.

Sure, double rainbows are cool,. But much like the Chewbacca mask video, the locus of joy here isn’t nearly as compelling as the joy itself. Vasquez doesn’t just appreciate the rainbow, he basically weeps at the sight of it.

Laughing babies are a universal language

Smiling and laughter — two obvious indicators of joy — are nearly impossible to misconstrue.

Keltner says, in one recent study, even people in remote areas of the world knew that the sound of laughter was “a sign of mirth and levity.”

That explains why babies, the most malleable and imitative of humans, are so gosh darned good at laughing. Though that doesn’t mean what they laugh about is easy to explainh: Take this video of a baby losing his stuffing over his dad ripping a piece of paper. Funny to an adult? Not really. But the baby belly laughs definitely are.

And as if you needed any more proof, observe this legendary laughter feedback loop — four quadruplets giggling on their mother, each feeding off the others’ good humor. They even sound alike!

Much like homecoming videos, there’s something to be said about the event horizon of joy, of witnessing the exact moment someone’s life is changed for the better. A surprise gift or pregnancy announcement will do.

Sure, you respect the planning that goes into these videos, but it’s really all about the look on the recipient’s face.

This dad’s happiness made him a viral sensation in 2012. Nothing like family, a surprise, a passion, and a good old manly cry to earn 10 million views.

Or these parents, who just found out they were grandparents-to-be and couldn’t care less about the camera in their face. That’s some prime-cut, 100% authentic joy right there.

As we said before, add animals, and any video’s joy potential goes off the charts.

It’s interesting, though — there’s a specific feeling to be had when watching other people interact with their animals as opposed to just animals alone.

Sure, a puppy rolling around on the floor is adorable, but watching, say, this boy helping his little pup discover the joys of howling speaks even more to our humanity.

Or, you could go deeper and combine laughing babies AND puppies. 16 million views on this one:

Is there such a thing as too much joy? You can ponder that if you ever wipe that goofy grin off your face.