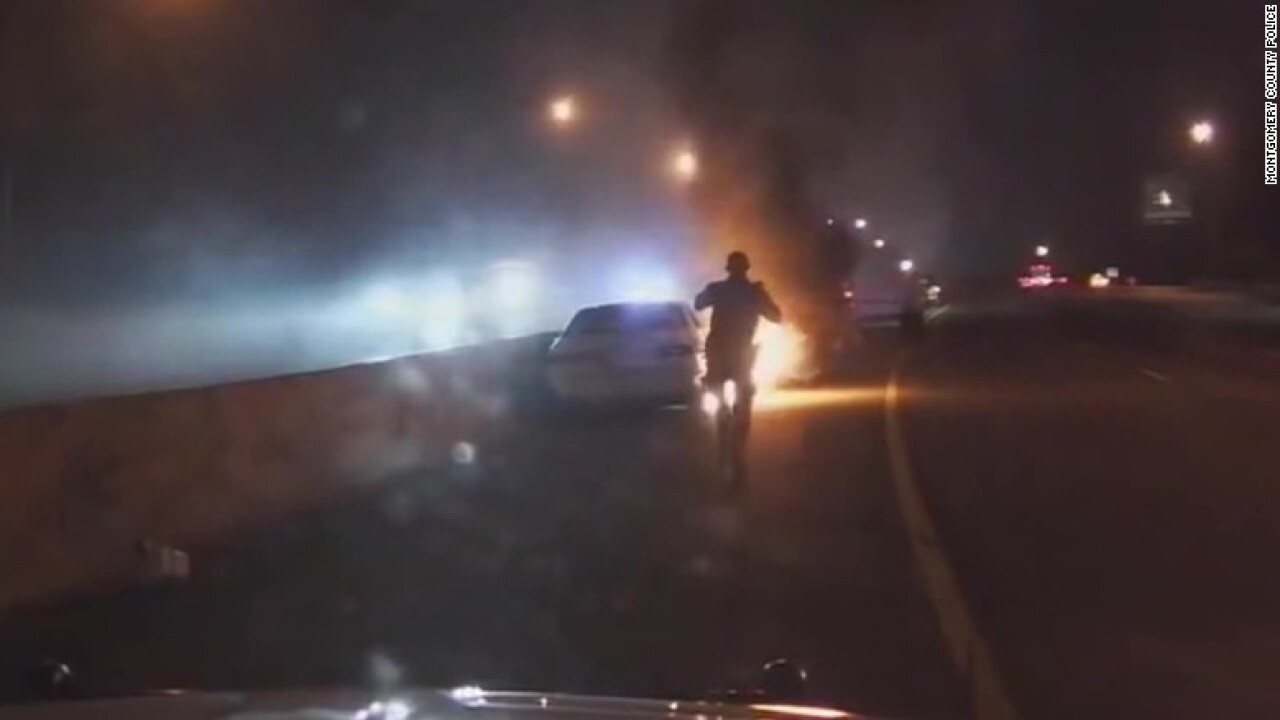 In his three years of service with the Montgomery County, Maryland, police department, Officer Cody Fields has been dispatched to car crashes many times.

But just after midnight on September 1, 2015, he responded to a crash unlike any other.

“As I was driving up to it, all I could see was the bright image of flames coming from the car. I thought, ‘Oh crap. It’s on fire. I hope there is not somebody inside,'” Fields recalls.

A 34-year-old man had fallen asleep while behind the wheel. His car veered off busy I-495 in Maryland and slammed into the concrete barrier, knocking him unconscious.

It didn’t take long for the officer’s instincts to kick in.

“I had to walk through the fire.”

“I had to walk through the fire. It kind of built underneath my feet; it was coming at my legs. It was really difficult to see the window, difficult to see inside the vehicle because of all the fire and smoke,” Fields says.

Soon, Fields got some help from Officer Brian Nesbitt, who arrived on scene and noticed his colleague trying to break the car windows. That’s when Nesbitt realized someone was trapped inside.

“It was a little scary watching everything burn right in front of us,” Nesbitt says. “We knew we had to get him out of there.”

The two men pulled the victim out of the driver’s seat, without even unbuckling or cutting his seatbelt, and across the middle console. They dragged him to the rear of the car, as the vehicle fully ignited in flames. The man was barely breathing. Both officers knew they had rescued him from the fire, but they didn’t know if they saved his life.

“Basically he went into the ambulance and the ambulance drove away. We didn’t know what the outcome was going to be,” Nesbitt recalls.

As for the two officers, miraculously, neither was injured.

Montgomery County, Maryland, Police Department Officers Cody Fields and Brian Nesbitt saved a man from a burning car after he fell asleep and slammed into the concrete barrier.

They returned to headquarters and realized the dashcam from Fields’ patrol car had recorded the entire harrowing rescue. They decided to watch the video together, in the parking lot.

“Wow, is that us?” Fields recalls thinking. “It was almost unbelievable.”

Nesbitt says that upon reflection, they thought they may have made a dumb move in braving the flames. But they saved a man’s life.

The two officers went their separate ways and didn’t show the video to their superiors. Then, six months later, a colleague suggested that they be honored for their heroics.

The agency made the video public in March at an awards ceremony where both officers received the Medal of Valor, the highest honor in the department.

At that event, for the first time they also met Rashad Isreal, the man they had saved. He had not been injured in the crash or fire and was very grateful for the officers’ act.

“They are really heroes. They saved me. I feel very appreciative,” Isreal says. “Five seconds longer, a minute even longer, I wouldn’t even be here.”

Isreal says he doesn’t remember anything from that night. He says he woke up in the ambulance and asked paramedics if he hurt anybody. The first time he saw the dashcam video was at the police awards ceremony.

“Them going into the flames, seeing them going in, how they did rescue me? It was just amazing,” Isreal says.

He says he watches the video often. It serves as a reminder of how lucky he is and how he shouldn’t take life for granted.

Officer Fields jokes that the county fire department has sent him and Nesbitt applications to join their squad. But he’ll stick to police work.

When asked if he would respond to the same call again, Fields smiles and replies, “Only if I have Officer Nesbitt with me.”