Mom still does CrossFit while pregnant 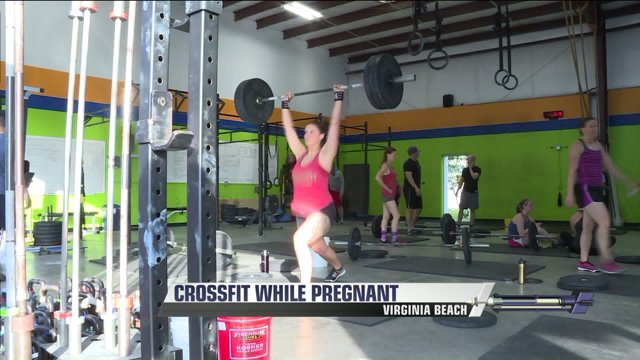 VIRGINIA BEACH, Va. - Women in Hampton Roads and across the country are lifting for two, themselves and their baby. While it's known being pregnant can lead to nausea and fatigue, some women are battling that one squat at a time.

Ashley Cardoza is 29 weeks pregnant and can't imagine her life without CrossFit. She started in 2013 after her
doctor recommended weight training. There's no doubt CrossFit is intense, but Ashley still keeps up.

"I do do everything," said Ashley.

Ashley only stops when she's out of breath, just as her doctor instructed, but she does the same workout everyone else does.

"I still squat, everybody should squat," laughed Ashley. "I still do clean and jerks. I still do snatches, those are the main things in crossfit.

This is Ashley's third pregnancy and she credits CrossFit for how easy it's been. She hasn't had any complications.

"This is what keeps me going every day. If I sat around on a couch, I'd be miserable," said Ashley.

She's not alone. Ashley is one of many women at CrossFit Chronic in Virginia Beach who do the workout of the day for two. This makes owner Penny Hughes think something might be in the water.

"We have at least five to seven every single year. Everything usually culminates during the summer. So we usually have from springtime til the end of the summer, sometimes into the fall, just birth, after birth after birth," said Penny.

Just because Ashley is doing burpees, which she does much slower than the normal, and handstands, does not mean she doesn't care for her baby. "Obviously, the number one thing for me is the health of my child."

So come July when Ashley is due, she'll still be lifting.