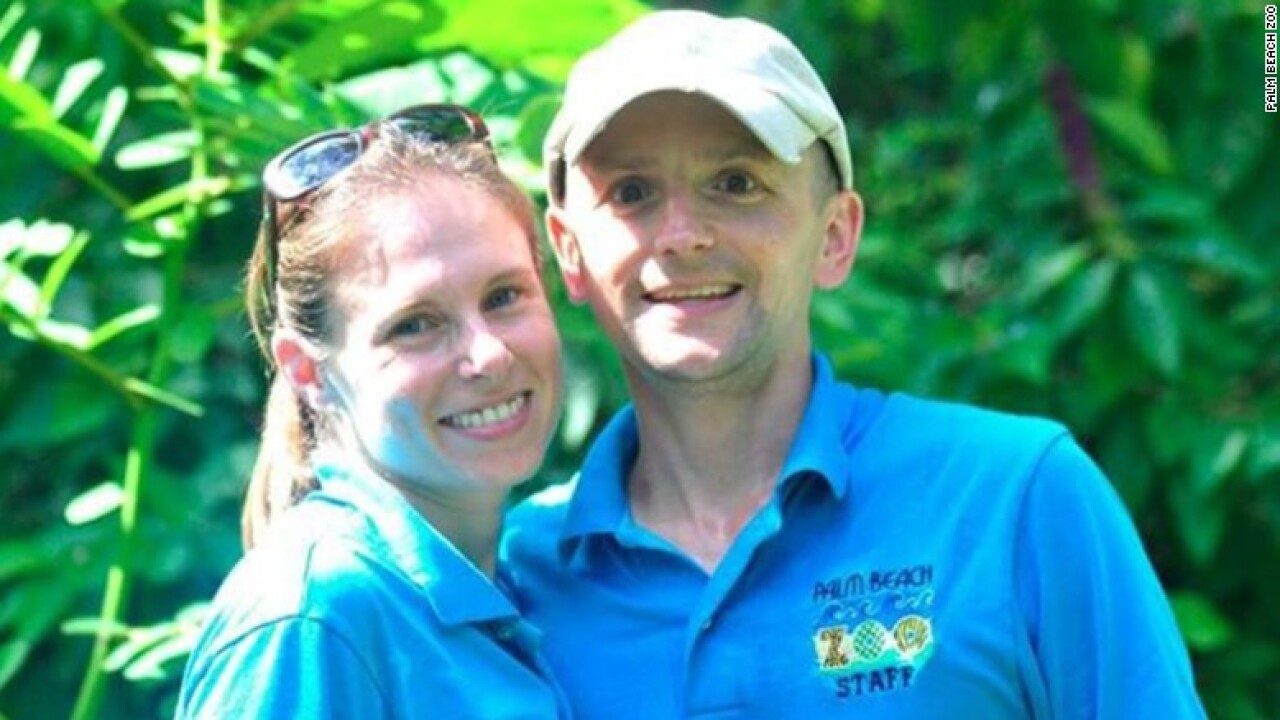 A keeper at the Palm Beach Zoo died Friday afternoon after being attacked by a rare kind of tiger, zoo spokeswoman Naki Carter said.

Stacey Konwiser, 38, lead tiger keeper at the zoo, was killed by a 13-year-old male Malayan tiger, one of four at the facility, in the contained area where the animals are fed and sleep, Carter said.

Zoo officials said it didn’t appear Konwiser did anything out of the norm as she worked in the enclosure, known as the tiger night house, and prepared to talk with zoo visitors about the animals in a “Tiger Talk.”

The tiger was off-exhibit at the time and no guests could see what happened, Carter said. The tiger was never on the loose, contrary to early reports on social media, she said.

West Palm Beach police said the tiger was tranquilized and officers waited until the drugs took effect before they could reach the victim, CNN affiliate WPEC reported. Konwiser was taken by helicopter to St. Mary’s Medical Center.

Konwiser had worked three years at the zoo and was very experienced with tigers, Carter said. Her husband, Jeremy Konwiser, is also a trainer at the zoo.

“This was her specialty,” she said. “She loved tigers. You don’t get into this business without the love for the animals and understanding the danger that’s involved even more.”

Konwiser had a special bond with the big cats, Carter told the Palm Beach Post.

“I kind of referred to her as a tiger whisperer,” she said. “They spoke to each other in a language that only they could understand. And I can’t put into words or make you understand for anyone who didn’t know Stacey how much she loved these tigers and how much this zoo family loved her. And while she’s no longer with us, her memory will live on.”

Konwiser graduated from Mount Holyoke College with a bachelor’s degree in biology and received her master’s degree in conservation biology from the University of Queensland in Australia, the Palm Beach Zoo’s official Facebook page said.

Malayan tigers are a critically endangered subspecies. The Palm Beach Zoo provides a special program in which guests can pay extra to see the tigers.

There are less than 250 left in the world, Carter said. The zoo is part of a breeding program that aims to keep the animals from becoming extinct. Carter would not comment about the condition of the tiger except to say it has been contained. The investigation is ongoing and the Occupational Safety and Health Administration is taking over.

When the attack happened about 2 p.m., guests at the zoo were ushered into the gift shop before being told the zoo was closed for the day.

“This is my first time at the zoo,” one zoo visitor, Beverly Johnson of Fort Pierce, told the Palm Beach Post. “I wasn’t expecting this.”

The zoo was evacuated and will be closed all weekend.

‘They are trained to feel like that’s their territory’

Dave Salmoni, the large predator expert for Animal Planet, said he was not surprised such an attack happened in the tiger night house.

“Typically, zoo cats, that’s where they feel most comfortable,” Salmoni said on “Anderson Cooper 360.” “They are trained to feel like that’s their territory. So when you talk about acts of aggression or acts of dominance, which this might have been either, that would be the most likely place for something like this.”

Salmoni said people who work with big cats understand and accept the danger.

“It’s heartbreaking to hear about a story of someone who loves an animal so much,” he said. “I can relate. The same thing could possibly happen to me tomorrow.”

People for Ethical Treatment of Animals issued a statement criticizing the zoo.

“Today’s incident is only the latest in a long list of fatal maulings around the world, and that list will continue to grow as long as tigers and other exotic animals are locked in cages and compounds for human amusement,” said PETA Foundation Deputy Director of Captive Animal Law Enforcement Brittany Peet.

“In nature, tigers have home ranges of hundreds of miles, so it’s no wonder that confining them to small spaces causes them to lash out in the frustration, stress, anxiety and agitation that they suffer when they’re denied their freedom and the ability to behave normally in every way — including choosing their mates, raising their young and seeking privacy from prying eyes.

“PETA sends our condolences to the zookeeper’s family and hopes that this incident will save human lives in the future by making zoos everywhere reconsider the confinement of big cats and other wildlife.”

The zoo issued a statement Friday night and posted it on the zoo website.

“This is a very difficult situation for all zoo staff, family members of Konwiser, her family and the extended zoo family. We ask the media and public to respect the privacy of those involved during this difficult time.”

Other recent attacks by big cats

• In January, a keeper was severely injured at an Australian zoo founded by the late wildlife conservationist Steve Irwin.

• Last September, a keeper was attacked and killed by a a Sumatran tiger at a zoo in Hamilton, New Zealand.

• In June 2015, police shot and killed a white tiger that killed a man in Tbilisi, Georgia, after severe flooding allowed hundreds of wild animals to escape the city zoo.

• In 2013, a 24-year-old woman working at a Northern California animal sanctuary was mauled and killed by a lion.

• In 2007, an escaped Siberian tiger attacked and killed one zoo patron and injured two others in a cafe at the San Francisco Zoo.

• In 2003, a white tiger attacked Roy Horn of Siegfried and Roy during a performance in Las Vegas. The tiger lunged at Horn’s neck about halfway through the show and dragged him off stage as audience members watched.