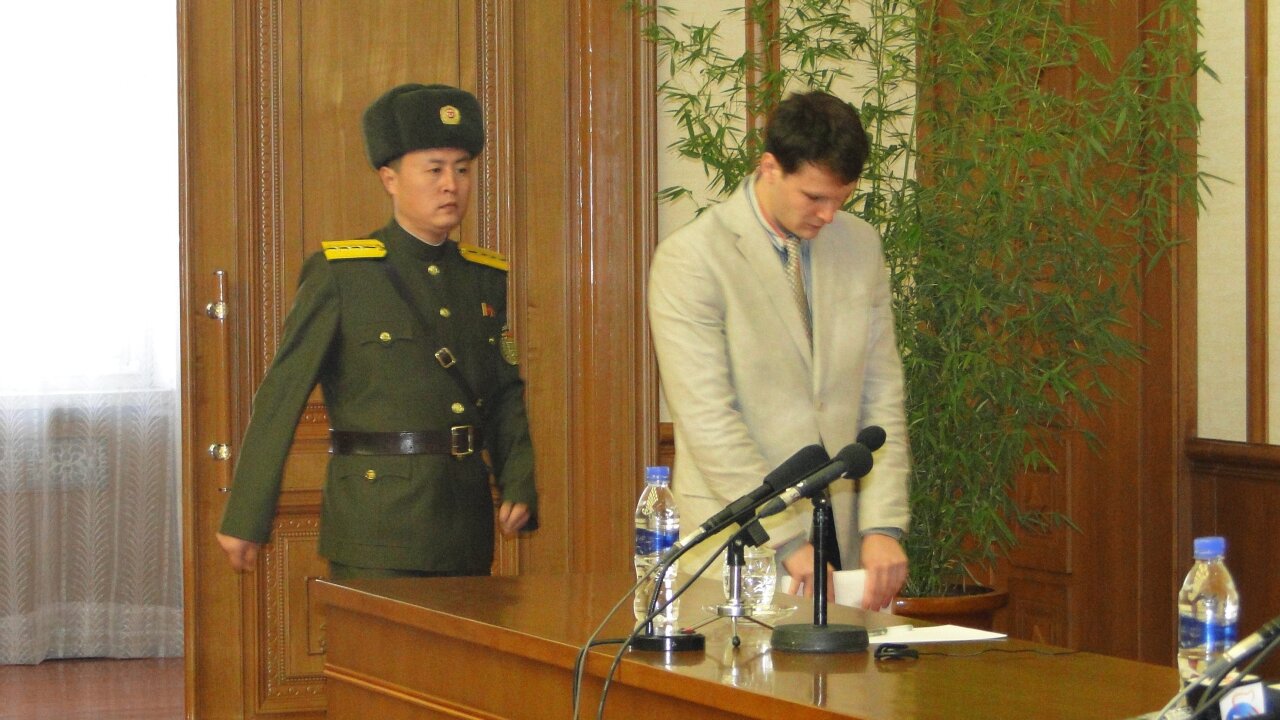 North Korea has sentenced an American student to 15 years of hard labor after accusing him of removing a political banner from a hotel.

The United States urges North Korea “to pardon him and to grant him special amnesty and immediate release on humanitarian grounds,” Toner said.

Warmbier had traveled to Pyongyang on a trip organized by Young Pioneer Tours, a China-based travel company. He was arrested on January 2, as he was about to board a plane to leave the country, on the charge of committing a hostile act against the state.

The North Korean government alleged that Warmbier was encouraged to commit the “hostile act” by a purported member of a church in his home state of Ohio, a secretive university organization and even the CIA.

In court Wednesday, North Korean officials presented fingerprints, photos of a political banner and surveillance images — proof, they said, that Warmbier committed crimes against the regime.

The 21-year-old student pleaded for mercy.

“My brother and my sister need me,” he said. “I beg that you see that I am only human, how I have made the worst mistake of my life.”

Greg Scarlatoui, executive director for the Committee for Humans Rights in North Korea said he may be forced to work in agriculture, which happened with other American prisoners.

“He may spend his day planting apple trees. It will be fairly grueling forced labor,” Scarlatoui said.

In an emotional press conference last month, Warmbier admitted to attempting to steal a banner with a political slogan from his hotel in the North Korean capital. It is not known whether Warmbier made the admission under duress.

Appearing to read from a statement, he said: “I committed the crime of taking down a political slogan from the staff holding area of the Yanggakdo International Hotel.”

“I never, never should have allowed myself to be lured by the United States administration to commit a crime in this country,” he said tearfully as he begged for forgiveness.

“I wish that the United States administration never manipulate people like myself in the future to commit crimes against foreign countries. I entirely beg you, the people and government of the DPRK, for your forgiveness. Please! I made the worst mistake of my life!”

The tour company he traveled with said on its website it is aware of his sentencing and that it should “be viewed in similar context of previous cases of Americans being sentenced” in North Korea.

On Wednesday, the State Department spokesman accused North Korea of politicizing the arrests of U.S. citizens, saying, “It’s increasingly clear from its very public treatment of these cases.”

Kenneth Bae and Matthew Miller are the most recent American detainees whom North Korea has released.

Both were accused of perpetrating “hostile acts” against North Korea; Miller spent less than a year in custody after being sentenced to six years of hard labor, and Bae, facing a 15-year sentence, was held for nearly two years.

The pair secured their freedom in late 2014.

Richardson is a longtime diplomat and a former U.S. ambassador to the United Nations.

Ohio Gov. John Kasich has also been pushing behind the scenes for Warmbier’s release, an aid to the governor told CNN.

Analysts say it’s possible Warmbier will be released at some point, but very likely Kim Jong Un’s regime could use the student as leverage — and will want a VIP from the United States to travel to North Korea to get him.

Warmbier was on the dean’s list at the University of Virginia, CNN affiliate WCPO-TV reported.

He was also part of a student organization that “trains young professionals for careers in investment management and other functions within the financial markets,” according to the group’s website.

Kieren Thomas, a friend of Warmbier’s younger brother, told CNN in January that the detained student was a star soccer player in high school, outgoing and loved to travel to out-of-the-way places.

“Otto was one of the smartest guys I’ve ever met,” Thomas said. “I’ve never met a person that had a bad thing to say about him.”

Tensions have been particularly fraught on the Korean Peninsula in recent weeks.

The aggravation comes during eight weeks of joint military exercises between the United States and South Korea, billed as the largest ever.