17 million people under flood warnings from Texas to Illinois 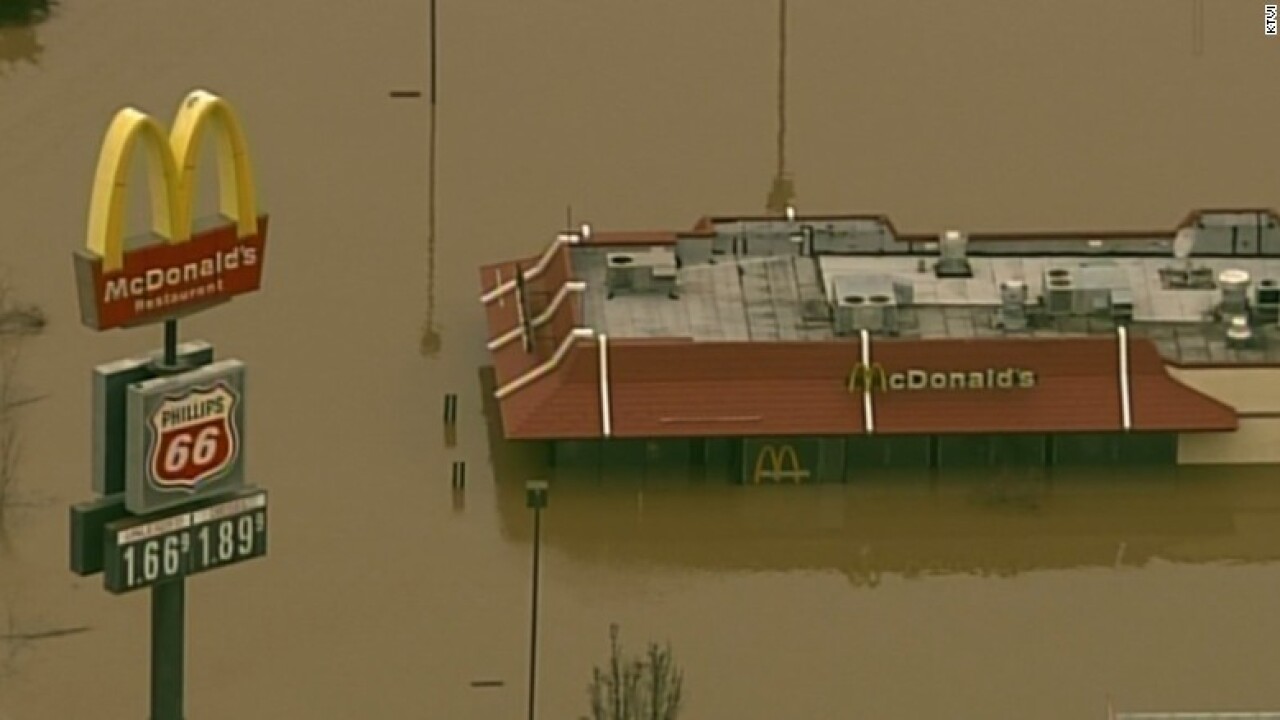 Even if it doesn’t rain another drop in Missouri, Kathy Wunderlich’s home in West Alton may still get flooded.

Recent deluges have engulfed towns, homes, fields and roads in deadly floodwater. Though the storms are gone, the rivers have kept rising from Texas to Illinois.

In West Alton, near St. Louis, runoff pushed the Mississippi River over the levees on Tuesday, and Wunderlich was headed for higher ground with her belongings in tow.

Wednesday morning, aerial cameras captured parts of the greater St. Louis area under water. A shopping area was half submerged, a sign for a Jimmy John’s sandwich shop at the top of a building still visible above the water line.

“We emptied out our basement of anything important, which is strictly storage anyway. We cleaned out the house of clothes. Things that can’t be replaced. Important pieces of furniture,” Wunderlich told CNN affiliate KMOV.

A visibly exhausted James Harris told KMOV that if his house floods, he’s not moving back. “It wears you out,” he said. “This is the last time I’m going to do this.”

“They came and got us and put us in a raft and took us across the railroad tracks,” Scott said.

The rescuers took her to a nursing home where “everybody is real friendly,” she said.

But she worries that her home is devastated. No one has given her an update. And she’s also concerned about her neighbors.

“I really feel for the people. I really do. My heart goes out to them,” she said, adding that she has no patience for people who take risks.

“Some of these people on the highway trying to drive through this stuff — they’re very stupid,” she said.

Wunderlich and Scott are among 17 million people nationwide living in areas where there are flood warnings, according to the National Weather Service.

Sections of Interstate 44 have been shut down, affecting not just St. Louis but much of the region. Many people are in hotels and all are encouraged to stay off the roads.

Throughout the country’s midsection about 400 river gauges are over flood stage, with around 45 showing major flooding, the National Weather Service said.

Many of those are in or around St. Louis. Some rivers and streams have already crested, and some haven’t yet, like the Mississippi. It is expected to reach its peak late Wednesday or early Thursday in Missouri along with other area streams.

At its peak, the Mississippi should be at its highest level ever, Nixon said, beating the highest level of the great flood of 1993.

“That’s why we’ve got a state of emergency,” he said. But it is expected to drain off rapidly, so he is hopeful the cleanup phase will begin soon.

The town of Union is already moving into cleanup mode.

“The river crested (there) yesterday,” said emergency manager Russell Ross. Floodwater has receded from a major highway there, but it is yet to be reopened, as it needs to be checked over.

Water creeping up the sandbags

Nixon has activated the National Guard to aid first responders and provide security in evacuated areas. And residents have volunteered by the dozens to fill sandbags and then pass them hand to hand to be transported or laid in place.

The Mississippi River is already creeping up the sandbags laid out to protect the town of Alton, Illinois, which lies across the river from West Alton, Missouri.

Downstream, in Illinois, a prison has been partially evacuated. Menard Correctional Center is on the banks of the Mississippi, and the staff anticipates minor flooding in some of its cells when the river crests.

The situation is also looking desperate in Missouri’s Ozarks, according to the mayor of Rockaway Beach.

“It is devastating,” Don Smith said on CNN. “We are begging for help.”

Evacuations have been going smoothly, he said. But he was very concerned that the flooding will get worse and the town doesn’t have the capacity to protect itself.

Storms have been blamed for roughly 49 deaths this past week across the country. Thirteen died in Missouri, 11 in the Dallas area, five in southern Illinois, five in Oklahoma and at least one in Georgia.

Tornadoes are being blamed for most of the deaths in Texas.

But many of the rest died after their cars were swept away by floodwater, like five international soldiers temporarily stationed in Missouri for training.

Witnesses say that they drove onto a flooded road and rushing water carried them away.

Others came close to suffering the same fate.

In Jefferson County, south of St. Louis, rescuers pulled a man from his car stuck in floodwaters, CNN affiliate KMOV reported. He said he had not seen the water, because it was dark.

In the same county, Shelia Seaman helped a friend move his things out of the way of rising water. Then they returned to get his dog. “It was too late,” she told KMOV. “We couldn’t get back across the water.”

The friend took a boat to try to rescue the dog, but rushing water washed the boat away. The friend survived and Seaman was able to get in touch with him. There was no word on what happened to the dog.

Blame it on El Nino

At least 69 tornadoes have touched down in the United States in just the past week, said CNN meteorologist Pedram Javaheri.

“Typically, you see about 24 for the entire month of December,” he said.

But flooding causes many more deaths in the United States than tornadoes do. And there have already been about 400 reports of rivers flooding in the country.

In some places, the rainfall hasn’t stopped for weeks. Portland, Oregon, and Seattle have been drenched with rain every day in December, Javaheri said.

And the United States isn’t alone. The United Kingdom and South America are dealing with their own massive flooding.

Blame it on El Nino, a warming of the eastern Pacific Ocean, mainly along the equator.

El Ninos occur every two to seven years in varying intensity, and the waters of the eastern Pacific can be up to 4 degrees Celsius (7 degrees Fahrenheit) warmer than usual.

The phenomenon can cause more frequent and intense storms, as well as massive economic damage, as the major El Nino in 1997-1998 did.

The damage worldwide from that El Nino was estimated at $30 billion to $45 billion, Javaheri said.