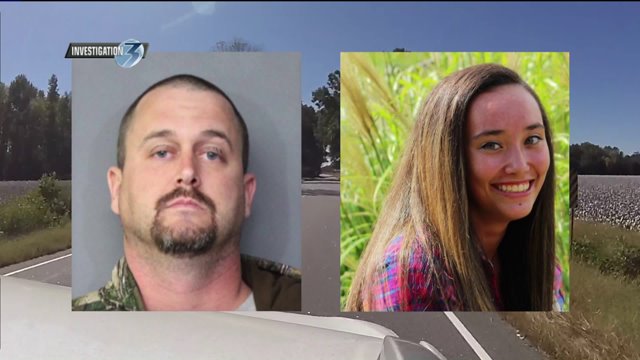 Our sources said that when they examined that data, it led them directly to a house on Smiths Ferry Road in Southampton County. There, on April 9, Norfolk police and other agents assisting them found human remains later identified as those of Anjelica “AJ” Hadsell. She had been missing a month and was the subject of a massive search.

At the time, police declined to say what led them to that abandoned brick ranch near the North Carolina line, but now sources are revealing they essentially followed a trail stored in a GPS unit.

Those sources said the trail showed the GPS typically used by Wesley Hadsell indicates the unit traveled south on Smiths Ferry Road, past the abandoned house, and continued into North Carolina. There, according to the sources, the track shows the GPS unit turned around and traveled back into Virginia. The track took the GPS into the driveway of the house.

Wesley Hadsell has told NewsChannel 3 repeatedly he was familiar with that area of Southampton County because his work for a company called Quality Plumbing and Mechanical often took him there. But in an interview with NewsChannel 3’s Marissa Jasek, he denied he had ever been to that house.

“It (his work van) would not be at that house, that’s the whole thing,” Hadsell told Jasek.

“So you were in the same county where her body was found the day after she disappeared?” Jasek asked Hadsell in an interview recorded while Hadsell was in the Norfolk jail.

“How do you think that looks?” Jasek asked.

“It leaves a lot of room for questioning,” he responded. “I think it looks like a coincidence.”

Hadsell's attorney, Eric Korsland says we shouldn't be too quick to convict. He says there's still too many questions.

"Who else has access to this work van," Korslund asks. "That raises another question as well. I mean its one thing if you have GPS on somebody`s cell phone because a cell phone could be identified to a particular person, but a work van belongs to a company and so there`s a lot of people that use this work van."

Law-enforcement sources also told NewsChannel 3 they have records and a video showing Hadsell bought gas not far from the abandoned house. The sources said the video shows Hadsell looking around nervously as he fueled his van. That video is mentioned briefly in a federal court filing by Hadsell’s attorney, Keith Kimball. However, Kimball wrote the video depicts “nothing.”

Before AJ’s body was found, Norfolk police charged Hadsell with interfering in their investigation. Hadsell admitted he broke into a neighbor’s house, where he told NewsChannel 3 he found AJ’s college jacket. That neighbor told us police later questioned him about AJ’s disappearance. He told investigators he had nothing to do with it and that he passed a lie-detector test.

Police later dropped Hadsell’s state charges, but federal prosecutors indicted Hadsell for being a felon in possession of ammunition. Police said when they arrested Hadsell at a hotel, they found bullets in his room. A search of his cell phone later uncovered a video showing him and AJ at a Chesapeake shooting range in December, 2013.

Norfolk detectives have refused to talk about this case in public. But court filings make it clear they were investigating Hadsell for AJ’s disappearance. A Norfolk police search-warrant, filed under seal, says police wanted to search Hadsell’s hotel room. Under the crime they were investigating, they wrote, “murder,” according to federal court filings. The medical examiner said AJ died of acute heroin poisoning. No one has been charged in her death.

Those federal court filings also show police seized and searched Wesley Hadsell’s iPhone 6. The documents for that search have been sealed. But our sources say investigators were able to see that Hadsell’s cell phone, and AJ’s cell phone were together around the time she was last seen. The sources would not be more specific. From court filings, it appears AJ’s phone wasn’t used after she vanished. Hadsell has said he was not with AJ on March 2, the day she was last seen. Hadsell told Jasek in an interview he and his wife began receiving strange texts from AJ’s cell phone that day, indicating she had been using heroin. Hadsell told us he believes someone else was sending those messages.

Hadsell has maintained he had nothing to do with AJ’s disappearance or death, and that he is not guilty of the federal charges. However, a federal-court filing made public Thursday showed he will plead guilty to one of the charges of having ammunition.

NewsChannel 3 contacted the Norfolk Police Department for a comment to this story. Public affairs Officer Melinda Wray sent this statement:

"The Norfolk Police Department wants to ensure the public that Anjelica's case is both active and open. Norfolk detectives have been and will continue to pursue each and every lead presented. NPD remains committed to providing Anjelica and her family the justice they deserve, and the department's work is not complete until that day comes."