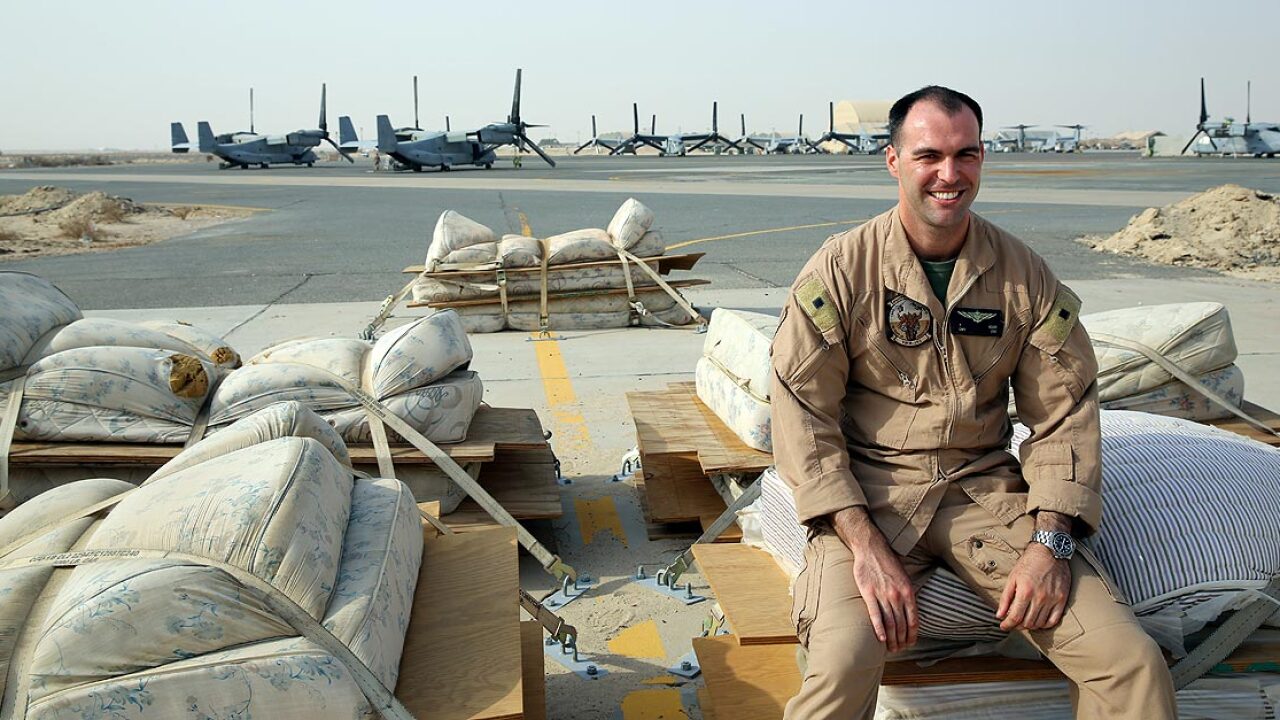 Marine Corps Capt. Paul Keller, a pilot with Marine Medium Tiltrotor Squadron 165, assesses the firmness of the expeditionary safety equipment that he flawlessly landed an MV-22 Osprey on after the aircraft experienced a technical malfunction with its landing gear. (Click to enlarge)

Marines are known for their ability to stay calm under pressure and approach problems with a keen understanding of the dangers around them. For everything that could go wrong, no matter how unlikely, there is a plan in place that Marines are ready to execute at a moment’s notice.

Capt. Paul Keller, a pilot with Marine Medium Tiltrotor Squadron 165 along with his crew, proved once again that there’s nothing they’re not ready for.

Keller is no stranger to flying. He is an experienced pilot, who has been flying Ospreys for three years and was previously a CH-46 pilot before then.

“I went through flight school and then through Osprey flight school,” said Keller. “Once I got to my first squadron, I received my more advanced qualifications.”

During a hot night in late July, making their way back from a routine support mission, Keller and his crew started having problems with their landing gear – not one would deploy.

“We got the initial indication in Iraq, but we had enough gas to make it back here and troubleshoot the problem,” said Keller. “Inside our emergency procedures checklist, there are certain steps you run through and we ran through all of them, but the gear were still stuck up.”

Capt. Keller knew they had enough fuel to work on the problem and stayed aloft, instead of rushing in for an immediate emergency landing. Despite finishing the checklist with no success, Marines in the air and on the ground put their heads together to come up with new ideas to get the Ospreys landing gear to come down.

“We tried some further troubleshooting steps that the crew and the Quality Assurance shop had thought of while we were in a holding pattern around the airfield,” said Keller. “By that point, it became apparent that the gear weren’t going to come down.”

With the malfunction refusing to give in, the Marines knew they would have to use their emergency ‘landing pad’. At the end of the runway, they had previously staged mattresses, stacked high and strapped down, that would give the Osprey a soft spot to land on to minimize any damage.

“That is the actual published emergency procedure,” said Keller. “We’ve all read up on it before and the Marines already had the emergency landing pad set up.”

Though it is an extremely rare malfunction to have all three landing gear stuck in an up position, Keller had no doubts in the abilities of his crew under pressure.

“We were all confident that we were going to make it down alright,” said Keller. “This is a thing that we have all done drills for and read about, but this was our first real life application.”

Keller made the decision to make a hovering pass at the landing area, knowing that it would help remove the desert dust from the pad and maintain visuals with the ground personnel that were set up in advance. When the crew was ready, Keller brought the aircraft in approach and hovered over the landing pad. Then, he carefully lowered the aircraft into position.

Keller emphasized the calm and confidence of one Marine in particular, his crew chief, Cpl. Derek Levi.

“When we were landing, the crew chief had to give me calls telling me ‘you have to move right two feet’ or ‘come forward one foot,’” said Keller. “The crew chief, Cpl. Levi – he was on his game that day. He is a very experienced crew chief and he was extremely calm while giving us the input we needed. He was our eyes and a large part of making this successful.”

VMM-165 Marines had every possible helping hand standing by to respond if necessary. But, with Capt. Keller keeping the MV-22 hovering three feet in the air and Cpl. Levi dialing in the position by mere inches, the aircraft landed exactly where it needed to – perched on five piles of spring loaded support.

Keller explained that this event just goes to show how important the Marines’ hard work, training and meticulous safety procedures really are.

“Anytime we travel, we always bring all these mattresses everywhere we go and it takes a significant amount of manpower, time and planning to get all of the stuff on site,” said Keller. “But when that moment finally happened, we were prepared and everything turned out alright.”

During the rare landing, the aircraft suffered no damage, was repaired and flew again not long thereafter. For Keller and Levi, the unlikely event validated the procedures and training they constantly drill to second nature. And for the mattresses, they are still standing watch on the landing pad – ever vigilant and always ready.