What Pope Francis and President Obama will talk about 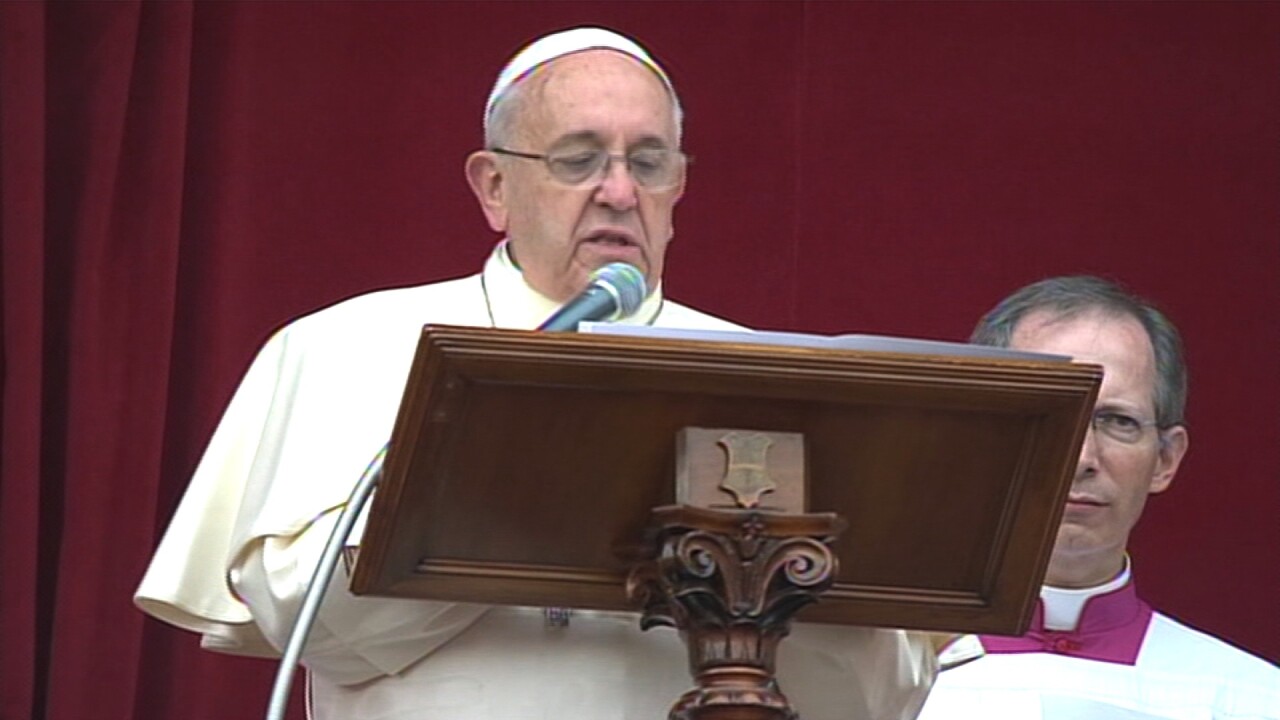 Pope Francis told tens of thousands of people gathered in front of the Vatican on Christmas morning, December 25, 2013, where he wants that peace to happen — in Syria, South Sudan, the Central African Republic and the Holy Land.

But beyond hot-button political topics, a senior White House official said the two men enjoy a rapport that means many different subjects could be raised, should the Pope be so inclined.

“The President values hearing from the Pope on a number of issues that they both care about,” the official said. “We expect that the Pope will feel very comfortable bringing up any issues on his mind.”

Francis arrives in Washington Tuesday for a whirlwind trip that also includes a highly anticipated speech to a joint session of Congress on Thursday.

The President and first family will greet the Pope when he lands Tuesday afternoon at Andrews Air Force Base.

About 1,000 people, including some 300 children mostly from local Catholic schools, will also greet the Pope at the base, according to two senior administration officials.

Francis’s visit to the capital is expected to bring parts of the city to a standstill, with rigorous security measures set to close down roads as the Pope travels through Washington. The Department of Homeland Security has dubbed the visit a “National Security Special Event” — a special designation for high-profile events deemed terror targets.

The visit will therefore also be costly, with the Secret Service already spending about $15 million to rent bike racks that will be used as barriers along the Pope’s travel routes.

Only “a few” people will join Obama and Francis during their meeting, White House Senior Adviser Valerie Jarett told CNN, adding that the meeting was expected to be relaxed and “very personable.”

Vice President Joe Biden, who is Catholic, on Tuesday called the Pope’s visit “an important moment not only for American Catholics, but all Americans” and said Pope Francis has “become a moral rudder for the world.”

“I admire Pope Francis deeply and I’m excited about his upcoming visit,” Biden said in a written statement. “Pope Francis has breathed new life into what I believe is the central mission of our faith — Catholic social doctrine. The calling to respect all people, to treat everyone with dignity, and the obligation and responsibility we all have to take care of children, the elderly, the powerless, the hungry, and the forgotten — those most in need with the least among us.”

While some Republicans on Capitol Hill have criticized the Pope’s poltiics, House Democrats are looking to capitalize on his progressive positions. In three video messages released Tuesday, nearly two dozen called on Francis to address immigration reform, climate change and poverty during his speech to Congress — all positions on which the Pope is more in line with Democrats.

Two broad concepts defined the first meeting between Obama and Francis, held in March 2014 at the Vatican: conflict and poverty.

“I think the theme that stitched our conversation together was a belief that, in politics and in life, the quality of empathy, the ability to stand in somebody else’s shoes and to care for someone even if they don’t look like you or talk like you or share your philosophy — that that’s critical,” Obama explained at the time. “It’s the lack of empathy that makes it very easy for us to plunge into wars. It’s the lack of empathy that allows us to ignore the homeless on the streets.”

Obama described that “wide-ranging discussion” as focusing on both “the issues of the poor, the marginalized, those without opportunity, and growing inequality” and “the challenges of conflict and how elusive peace is around the world.”

He noted that the Pope has “a deep interest” in the Israeli-Palestinian conflict, events in Syria and Lebanon, and the potential persecution of Christians.

Obama, for his part, told Francis, “It is central to U.S. foreign policy that we protect the interests of religious minorities around the world.”

The Pope’s trip to Washington, however, comes on the heels of his visit to Cuba, so the island nation is expected to be high on the list of international topics Obama and Francis discuss.

The U.S. reestablished diplomatic relations with Cuba only this summer, with the Pope urging a reconciliation between the two governments. He met with the Castro brothers while on the island over the weekend.

Another key issue in the news likely to feature in the Pope’s White House visit is immigration, a subject that the two also addressed in their earlier meeting.

“He is very mindful of the plight of so many immigrants who are wonderful people, working hard, making contributions, many of their children are U.S. citizens, and yet they still live in the shadows, in many cases have been deported and are separated from families,” Obama said of Francis’ comments to him at the Vatican.

The Pope has strongly urged Catholics throughout Europe to reach out to and even take in the massive numbers of Syrian refugees currently seeking refuge from their war-torn country. The Vatican itself is housing a Syrian family, and has asked churches to do the same.

The U.S. has committed to taking in about 10,000 more Syrian refugees in the next fiscal year, with more expected after that, while some smaller nations have committed to take in tens of thousands. It’s not clear how the Pope will address that discrepancy.

But the pontiff seems to focus more on common ground in meetings with leaders, with stickier issues tending not to come up in a confrontational way.

In Cuba, rather than harshly rebuking the Castro regime for its decades of restricting freedom for its people, President Raul Castro walked away telling reporters how the Pope makes him consider returning to the Catholic Church and praying again.

As Obama described it last year, “We actually didn’t talk a whole lot about social schisms in my conversations with His Holiness. In fact, that really was not a topic of conversation.”

He added, “I don’t think that His Holiness envisions entering into a partnership or a coalition with any political figure on any issue. His job is a little more elevated. We’re down on the ground dealing with the often profane, and he’s dealing with higher powers.”