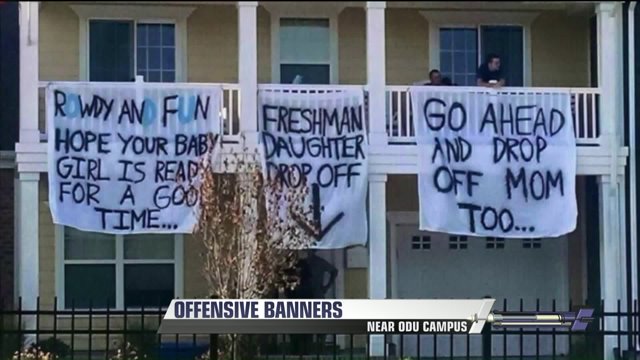 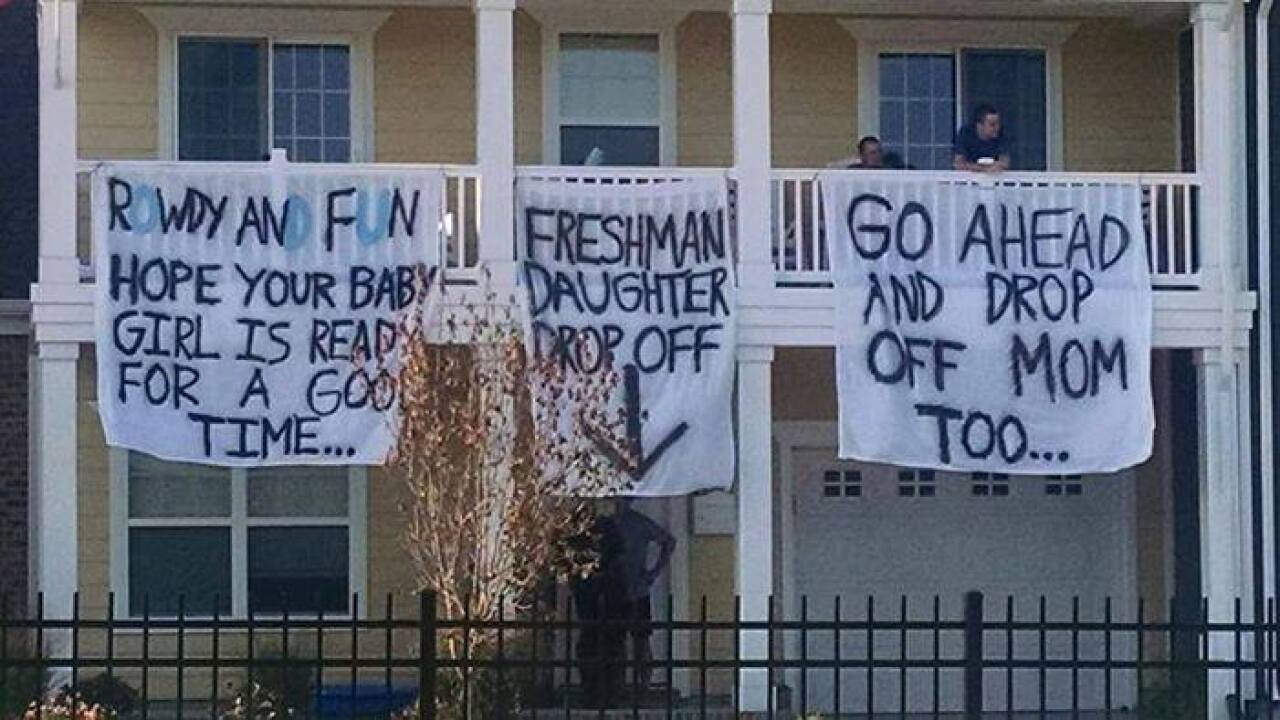 Norfolk, Va. - Old Dominion University officials took time from their weekend to respond to some banners hung up at an off-campus home that are upsetting many.

Banners up at off-campus house near ODU

"At ODU, we foster a community of respect and dignity and these messages sickened us," said ODU spokeswoman Giovanna Genard in a statement provided to NewsChannel 3.

The signs displayed at a home on 43rd street had messages like:

Now the Sigma Nu Fraternity has suspended the Eta Chi Chapter at ODU pending an investigation into the banners.

Sigma Nu released a message stating their displeasure with the banners saying they condemn the "derogatory and demeaning language used on the banners."

"Such language has no place in our Fraternity or within any caring community, such as that of ODU. Any Fraternity member found to be responsible for this reprehensible display will be held accountable by the Fraternity," said Brad Beacham, Sigma Nu Fraternity's Executive Director in a statement.

ODU officials say they believe the people who live at the private residence are students and say they are investigating. The University sent this statement in full:

"Messages like the ones displayed yesterday by a few students on the balcony of their private residence are not and will not be tolerated. The moment University staff became aware of these banners, they worked to have them removed. At ODU, we foster a community of respect and dignity and these messages sickened us. They are not representative of our 3,000 faculty and staff, 25,000 students and our 130,000 alumni.

Ours is a community that works actively to promote bystander intervention and takes a stand denouncing violence against women. The "It's on Us" video is just one example of ODU students' leadership on this topic.

In addition, the University ensures all students receive education on the prevention of sexual harassment and relationship violence.

Any student found to have violated the code of conduct will be subject to disciplinary action.”

"An incident occurred this weekend that does not reflect the University’s commitment to the prevention of Sexual Assault and Dating Violence. Not only do these actions taken by a few individuals undermine the countless efforts at Old Dominion University to prevent sexual assault, they are also unwelcoming, offensive, and unacceptable," said Chris Ndiritu, President of the Student Government Association.

I am outraged about the offensive message directed toward women that was visible for a time on 43rd Street. Our students, campus community and alumni have been offended.

While we constantly educate students, faculty and staff about sexual assault and sexual harassment, this incident confirms our collective efforts are still failing to register with some.

A young lady I talked to earlier today courageously described the true meaning of the hurt this caused. She thought seriously about going back home.

But she was heartened, she explained, when she saw how fellow students were reacting to this incident on social media. She realized this callous and senseless act did not reflect the Old Dominion she has come to love.

The Student Government Association has recently developed the “Monarchs Raising Up” campaign educating our students on prevention of sexual and relationship violence, bystander intervention, and off-campus responsible behavior. Through video, online and in-person content, we layer education on these topics for all of our students throughout the year. All new freshman just received education this weekend on preventing discrimination and sexual assault in sessions we call "First Class."

Here is a link to a video from our student leaders responding to this event--just one example of how Old Dominion University students take a stand every day in regards to respecting each other and promoting responsible behavior: https://youtu.be/NC72ruvRtdY

I said at my State of the University address that there is zero tolerance on this campus for sexual assault and sexual harassment. This incident will be reviewed immediately by those on campus empowered to do so. Any student found to have violated the code of conduct will be subject to disciplinary action.

Two years ago, the University mandated that all incoming freshmen get a lecture on this very issue.  It's called First Class.

The Women's Center is also another resource for students according to University officials.

Many of them joined the White House's campaign of "It's On Us" which is a nationwide push to stop sexual assaults on campus.

Seniors on campus told NewsChannel 3 that they had no idea about these initiatives.

"There could be a little more education for the upperclassmen because we did miss that one class. I do feel like they are trying to make that up because I have seen that they have guest speakers coming to talk to us about certain things, so they are trying to manage the gap just a little bit," says one of the students.