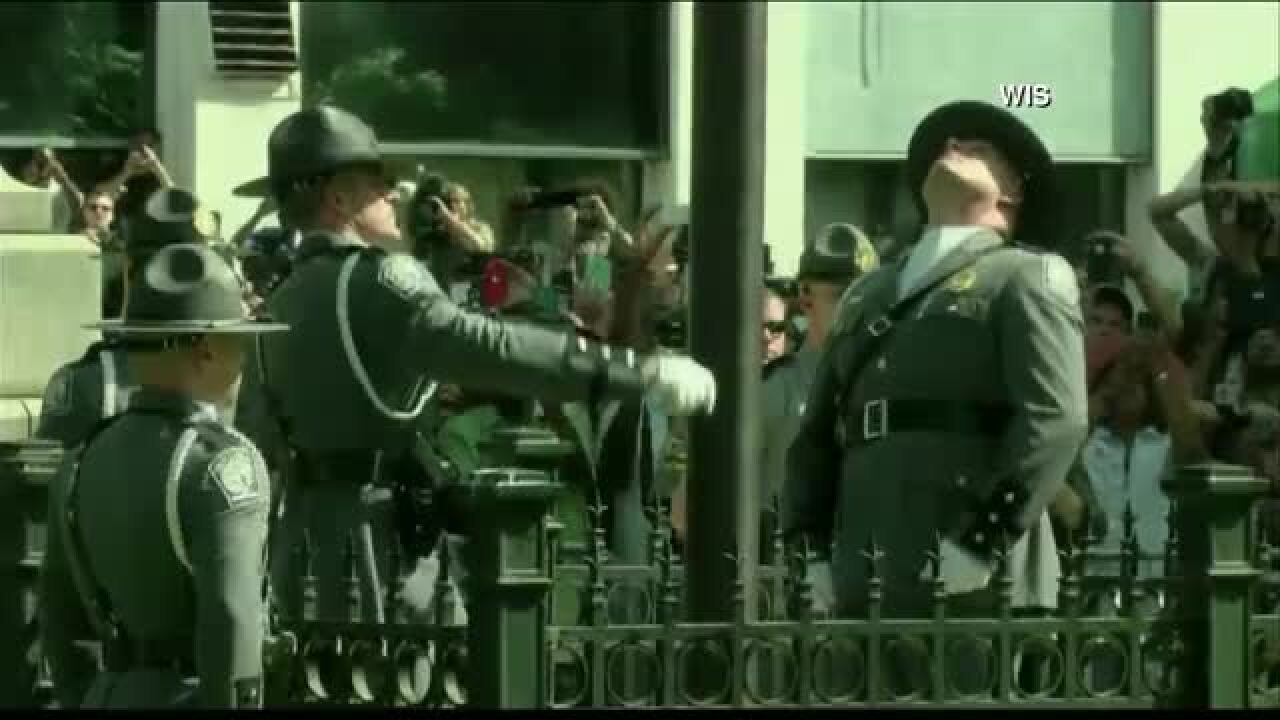 (CNN) — It took just a few minutes — simultaneously somber and festive — to put a bookend on the Confederate flag’s 54-year run at the South Carolina Capitol grounds.

As a crowd chanted “USA!” and sang a farewell refrain more familiar at sports arenas, uniformed highway patrol officers lowered the flag from a pole next to a soldiers’ monument shortly after 10 a.m. ET.

It was a move culminating years of opposition that swelled inexorably after last month’s massacre of nine black churchgoers in Charleston.

“Finally the world is looking at South Carolina” for something positive, said former state Rep. Bakari Sellers, one of the onlookers. “This is why Rosa sat and Martin marched, so that we can have events like this.”

A crowd of hundreds encircled the monument to witness a flag-lowering ceremony that was both choreographed and quick. The patrol officers handed the flag to one of the state’s two black Cabinet-level officials, Department of Public Safety Director Leroy Smith.

In a fate decided by lawmakers this week after hours of passionate and contentious debate, the flag will go to a state military museum about a mile down the road, where it will be exhibited.

The move comes only a day after the state legislature finalized a bill that ordered it. Gov. Nikki Haley, who argued for the flag’s removal after the Charleston killings, signed the bill Thursday.

“South Carolina taking down the confederate flag – a signal of good will and healing, and a meaningful step towards a better future,” his post read.

It’s the latest chapter in a controversy over the banner that has bubbled in South Carolina and elsewhere in the South for years. Opponents of the flag’s display on the South Carolina Capitol grounds said it amounted to tacit state endorsement of white supremacy, while its supporters argued it did nothing of the sort, but rather was a symbol of Southern pride.

Some in the crowd of hundreds came in opposition to the removal, at least a couple holding small Confederate flags of their own.

More were jubilant, even singing the refrain from Steam’s “Na Na Hey Hey Kiss Him Goodbye.”

The crowd outside the Capitol grew in the hours before Friday’s ceremony.

In the middle of the night, a man in a Confederate uniform walked up to the monument, saluted the Confederate flag and then left, CNN affiliate WCIV reported.

For a granddaughter of one of those who died in the Charleston shooting, the flag’s removal will be an appreciated gesture.

Alana Simmons, granddaughter of the Rev. Daniel Simmons, said she believed “the flag is definitely a symbol of division.”

“(But) taking down the flag, or even doing more with gun control, isn’t enough to change the hearts of man,” she told CNN’s “New Day” on Friday morning.

On Thursday, Haley signed the bill in front of a crowd that jammed a statehouse lobby to witness it.

She said she will give nine pens associated with the signing ceremony to the families of the nine victims of last month’s massacre at Charleston’s Emanuel African Methodist Episcopal Church. By showing forgiveness after the shooting, she said, they caused the change of heart that led to passage of the history-making bill.

“This is a story about the history of South Carolina and how the action of nine individuals laid out this long chain of events that forever showed the state of South Carolina what love and forgiveness looks like,” she said.

‘It’s bittersweet, because it took a tragedy’

Early Thursday morning, the South Carolina House of Representatives voted 94 to 20 to take down the flag, giving final approval to a bill that passed the state Senate earlier in the week.

The vote count was more than the two-thirds needed, but it came after a handful of lawmakers mounted a tenacious last stand, proposing amendment after amendment that made the debate drag on for more than 12 hours.

“It’s bittersweet, because it took a tragedy to bring this body to this decision,” South Carolina state Rep. Jenny Horne told CNN”s “New Day” on Thursday morning, referring to the Charleston killings three weeks ago. “I am so proud to be a South Carolinian and proud of what South Carolina has done to move this state forward.”

Horne, a Republican, delivered an emotional speech on the House floor in favor of removing the flag.

The House vote may even bring immediate benefits to South Carolina. NAACP President Cornell William Brooks said the group will move to lift its 15-year economic boycott against the state during a national convention this weekend.

“When the flag comes down, we lift the boycott,” he told CNN’s “The Situation Room” on Thursday. Removing the flag in South Carolina is an important symbolic victory, he said. But he added that there are battles still to be fought in other states where “emblems of bigotry and bias” still fly.

In April 1961, South Carolina hoisted the Confederate battle flag over the Capitol dome in Columbia to honor the 100th anniversary of the start of the Civil War. And it kept it there, flying under the U.S. flag and the state’s palmetto flag.

For years, African-Americans and others demanded the flag come down, saying it is a racist symbol that represents a war to uphold slavery and, later, a battle to oppose civil rights advances.

Uproar over the flag influenced lawmakers in 2000. In a compromise, the legislature passed the Heritage Act, which moved the flag from the Capitol dome to a pole next to a soldiers’ monument on the Capitol grounds.

Among those killed during a Bible study at the church was state Sen. Clementa Pinckney, who also was the church’s pastor.

After the massacre, photos quickly surfaced of Roof holding the Confederate battle flag, which he apparently revered as a symbol of white supremacy.

The racially motivated attack triggered a national wave of sympathy and outrage, and it renewed calls to have the battle flag removed.

The tenacity behind the fight to delay the flag’s removal had been fanned outside the House chamber before Thursday’s vote.

The State newspaper reported that pro-Confederate flag robocalls urged voters last week to call their representatives and to tell them to “not stand with leftist fanatics who want to destroy the South we love.”

“What’s next? This attack on our values is sick and un-American, and it has to stop right here and right now in South Carolina,” the call said.

Legislators had received death threats over their potential votes on the flag, CNN affiliate WOLO reported.

And sympathies for the Confederate battle flag go beyond South Carolina’s borders.

According to a new CNN/ORC poll, U.S. public opinion on the Confederate flag remains about where it was 15 years ago, with 57% of Americans seeing it more as a symbol of Southern pride than of racism.

State Rep. Joseph Neal, a Democrat, said he remembered the battle in 2000 to have the flag removed from atop the Capitol dome.

“There were those of us who thought we’d never see this day come,” he told CNN’s “New Day” on Thursday. “This day is testament to the power of love and unity and grace.”