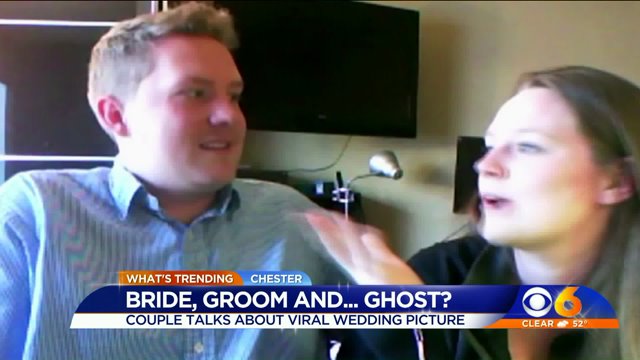 RICHMOND, Virginia-- Originally it was their favorite wedding photo until they spotted something really creepy seemingly lurking behind them.

Kevin Matthew Dennis uploaded the photo of he and his wife on their wedding day to reddit. The photo seems to show a ghostly face in between them.

Kevin said in the Reddit post, ‘Me and my wife’s favorite wedding photo… Until we saw what was between us… We still don’t know who it was.’

Kevin wrote that the couple didn’t notice the ghostly image at first and it wasn’t until his wife made it her Facebook profile picture that a friend pointed it out.

The couple said they have no idea if it was one of their guests.

‘Her sister said it might be her but that face look absolutely nothing even close to it. That face looks like a baby face imo [in my opinion,] Kevin Matthew Dennis wrote.

One kind commenter even photoshopped the image for the couple: