Rand Paul: ‘I am running for president’ 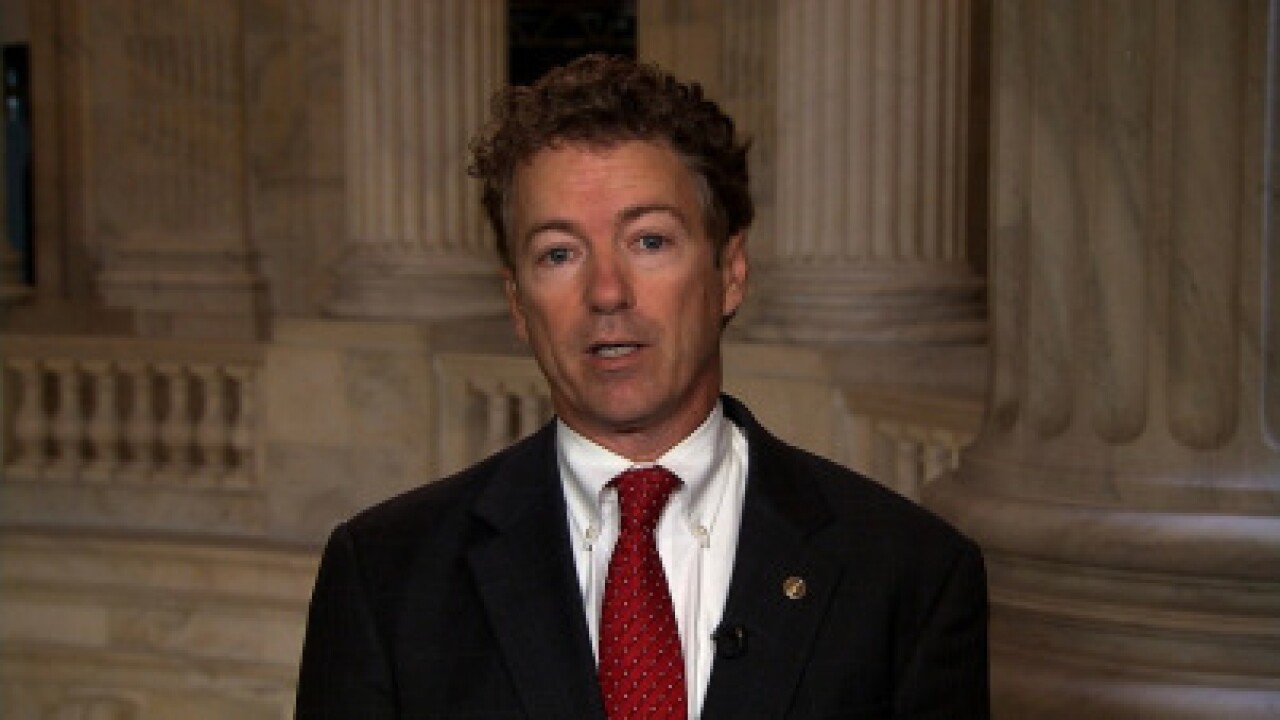 A candid Sen. Rand Paul of Kentucky says he’s interested in running for president in 2016.”I am different than some in that I’m not going to deny that I’m interested,” said the Republican first term senator in an interview released Tuesday by ABC News. Paul is the son of retiring Rep. Ron Paul of Texas, who was the 1988 libertarian candidate for president, and who made bids in 2008 and 2012 for the GOP presidential nomination under the mantle of […]

LOUISVILLE, Kentucky (CNN) — For Rand Paul, it’s all led to this moment.

Since riding the tea party wave into the Senate in 2010, Paul has carefully built a brand of mainstream libertarianism — dogged advocacy of civil liberties combined with an anti-interventionist foreign policy and general support for family values — that he bets will create a coalition of younger voters and traditional Republicans to usher him into the White House.

The test of that theory begins Tuesday when the Kentucky senator makes official what has been clear for years: He’s running for president.

“I am running for president to return our country to the principles of liberty and limited government,” Paul said on his new website.

A formal announcement will come at a rally in Louisville and he’ll immediately hit the campaign trail, swinging through New Hampshire, South Carolina, Iowa and Nevada — the states that traditionally vote first in the primaries and caucuses.

His wife, Kelley, and former Rep. J.C. Watts of Oklahoma will be among the speakers introducing Paul at the rally Tuesday.

So far, Paul joins only Texas Sen. Ted Cruz as a declared candidate for the GOP presidential nomination. “His entry into the race will no doubt raise the bar of competition,” Cruz said in a statement welcoming Paul into the race.

But the field is certain to grow in the months ahead with Jeb Bush, Chris Christie, Scott Walker, Lindsey Graham and others eyeing a campaign. Marco Rubio, a Florida GOP senator, is expected to launch his campaign next week.

For now, the nomination is up for grabs with no clear front-runner. Paul came in third place at 12% in a CNN/ORC International Poll of Republicans. Bush led the pack at 16% while Walker came in second at 13%.

Paul, the son of former Texas congressman and three-time presidential hopeful Ron Paul, will build on his father’s legacy as a candidate eager to bring civil liberties to the forefront of the national dialogue. He’s already used his perch on Capitol Hill to draw attention to those issues, including a 13-hour filibuster two years ago blasting the Obama administration’s drone policies and a lawsuit against the National Security Agency’s phone metadata collection effort.

But Paul, 52, will split from his father in one important way: his approach to the campaign. Where Ron Paul often focused on creating a libertarian movement, Rand Paul is planning a more strategic, less purist operation that could have a hope of competing in a general election.

The elder Paul will be at the rally on Tuesday, though he’s not expected to be a public face for his son’s campaign. He’ll attend the event as a “proud papa,” a source close to the senator said.

Elected in 2010 with strong tea-party support, Rand Paul quickly rose to national fame in part due to his father’s back-to-back White House runs in 2008 and 2012, but also because of Rand Paul’s willingness to fight fellow Republicans.

He engaged in a war of words with Chris Christie two years ago over national security and federal spending and, more recently, he’s taken swipes at Jeb Bush over issues like Common Core and medical marijuana.

Still, Paul has carefully worked to form inroads with establishment Republicans and other factions of the party’s base. He’s done so by becoming close political allies with Senate Majority Leader Mitch McConnell and backing mainstream candidates who competed against libertarian opponents during last year’s midterms.

While he bills himself as a conservative realist, Paul still tries to wear the mantle as the Republican most reluctant to take the country into war.

“I can tell you there will be one loud voice in our party saying, think of the unintended consequence,” Paul said in Iowa two months ago. “Think about what we’re going to accomplish and whether it will work before we go to war.’ I promise you that will always be something I take very, very seriously.”

The cautious foreign policy dance has drawn criticism from his father’s supporters, who say Paul has become too moderate, and from hawkish Republicans who fear he wouldn’t go far enough as commander in chief to tackle problems overseas. Democrats and some Republicans, meanwhile, have accused him of flip-flopping and pandering to donors.

On Tuesday, the Foundation for a Secure & Prosperous America — a hawkish group from the right — released a $1 million television ad buy against Paul’s foreign policy, which hits the airwaves nationally on cable, as well as in the key early states that Paul will visit this week.

“Rand Paul is wrong and dangerous,” says the narrator in the 30-second spot, arguing that Paul doesn’t understand the threat of Iran’s nuclear program. The ad ends with an image of a nuclear bomb detonating.

Responding to the ad, Paul’s adviser Doug Stafford said the attack is “false” and demonstrates that the “the Washington machine is worried that our message is resonating.” He added that Paul, who’s largely been silent on the Iran deal, will oppose any deal that doesn’t guarantee Iran gives up its nuclear ambition.

Paul is actually running for two offices at the same time, trying to hold onto his Senate seat while also running for president. Kentucky’s election laws say candidates can’t appear on a ballot twice, but with reluctant support from McConnell, a Kentucky powerhouse, the state’s GOP will likely change its presidential preference vote from a primary to a caucus. That would allow Paul to get around the rule.

His interest in the Oval Office has never really been a secret. Shortly after the 2012 presidential election, he started crisscrossing the country to paint himself as a nontraditional Republican eager to court voters who don’t typically live and vote in red areas.

He spoke at historically black colleges and universities, as well as Democratic strongholds like inner city Detroit and the University of California, Berkeley, focusing on criminal justice reform and civil liberties, two issues he believes can bring more people into the Republican Party.

But Democrats are eager to paint Paul as another member of the “same old Republican Party.”

“On issue after issue his policies are the same as the rest of the GOP, but even more extreme, and will turn back the clock on the progress we have made,” said Democratic National Committee chairwoman Debbie Wasserman Schultz in a statement.

As one of the few national Republicans who went to Ferguson, Missouri, Paul frequently boasts that there is no “bigger defender of minority rights in the Congress” than himself.

But those efforts could prove futile if he can’t get beyond controversial comments he made in 2010, when he questioned parts of the Civil Rights Act, especially provisions that place restrictions on private property.

He’s steered clear of such hot-button issues more recently. Last week, for example, he was one of the few Republicans who didn’t weigh in on religious freedom laws in Indiana and Arkansas that critics argued would allow businesses to discriminate against gays and lesbians.

Paul has also worked to maintain a following that includes a large swath of young voters who he partly inherited from his father. Heavy on tech and social media, his political team has opened an office in Austin, Texas, and will soon establish one in the heart of Silicon Valley. Like clockwork, Paul frequently holds up his phone during his stump speech and declares that what people do on their smartphones is “none of the government’s damn business.”

His nontraditional style is complemented by Paul’s wardrobe. The senator is known for wearing blue jeans with boots and a blazer when he’s on the trail, and during the winter, he opts for a turtleneck and sport coat rather than a tie.

But in his quest to become a national figure, Paul’s comments have come under scrutiny and some of his statements have led critics to question whether he’s ready for prime time. Earlier this year, Paul, an ophthalmologist, lent credibility to theories that vaccinations cause mental disorders, and last fall he caused a stir when suggesting that people could catch Ebola at cocktail parties.

And while he’s not media shy—he’s given hundreds of interviews in the past year alone—Paul can get short-tempered with reporters. He shushed a female interviewer in February, and last fall he blew up at a reporter who asked a question about foreign aid to Israel.