Krispy Kreme has a bacon hot dog donut. Would you dare? 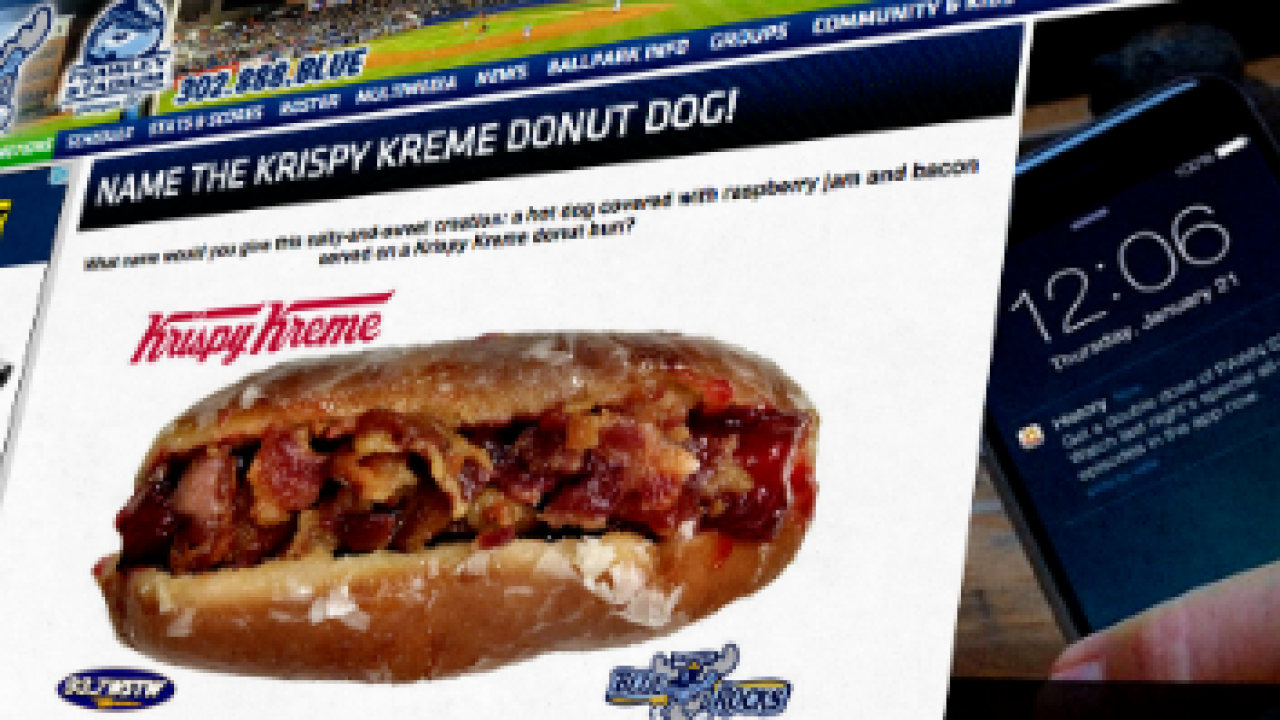 NEW YORK — Do arteries make a sound as they clog?

If so, prepare for a symphony of saturated fats in Delaware next month. Krispy Kreme is partnering with a minor league baseball team in Wilmington to sell a bacon donut hot dog.

The Wilmington Blue Rocks, a single-A affiliate of the reigning American League champion Kansas City Royals, is even asking fans to name this crazy culinary concoction — which also has raspberry jam on it.

My suggestion? The Suicide Squeeze.

If this new sweet and salty treat is a hit, could it find its way to the more than 980 Krispy Kreme stores around the world? Krispy Kreme apparently needs to do something to attract more customers.

This is the fourth consecutive quarter that traders were not pleased with Krispy Kreme’s results. This pattern has led me to wonder if investors were glazed and confused and if the doughnut craze was over.

It looks like that way on Wall Street. The stock has missed the market rally of the past year. It is down more than 2% since this time a year ago.

The only consolation for investors? Rival Dunkin’ Brands is doing even worse.

But is the sell-off an overreaction? If you look more closely at the company’s results, they weren’t really bad.

Overall revenue rose more than 11% in the fourth quarter. And same-store sales, one of the most important measure of health for restaurants and retailers, were up nearly 7%.

Brian Sozzi, an analyst for Belus Capital Advisors, said that investors should not ignore this growth.

“Krispy Kreme, amidst outcries by people to fast food companies to use antibiotic free chicken and beef, organic veggies, and remove sugar and salt content, just baked up nicely positive sales,” he said.

Sozzi pointed out that the company also is making the smart move to cut back on gimmicky promotions.

Giving out free donuts to people who say “Aargh” on Talk Like a Pirate Day might be a fun marketing ploy, but too many of those discounts tends to put a hole in your profit margins.

As for that bacon hot dog donut, Sozzi said this is proof that the company still wants to sell “overly indulgent” treats. And that could help position it in the breakfast wars against Dunkin’ and Starbucks.

And the stock’s latest slide is proof that the honeymoon period for new CEO Tony Thompson, who left Papa John’s last year to take the top job at Krispy Kreme, is over.

Perhaps Krispy Kreme should partner with Shake Shack, whose stock was also falling Thursday after it reported a bigger loss than forecast, on another new decadent product — a twist on the so-called Luther Burger.

A SmokeShack nestled between two donuts sounds delicious … and also disgusting. Although isn’t that the point?