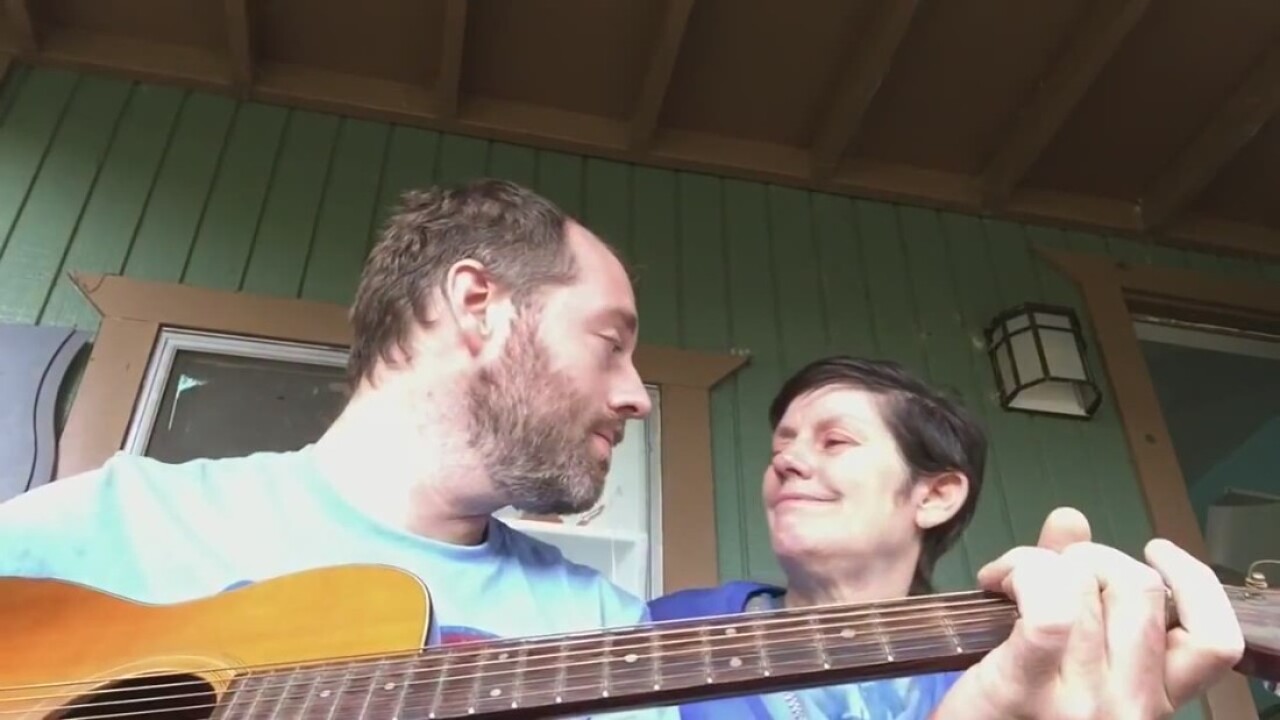 By: Doris Taylor
Posted at 7:45 PM, Jan 06, 2015
(CNN) — In October, a few days before Joe Fraley’s mom moved into an assisted living facility, before she stopped recognizing him and responding to his music, he sat beside her on the porch with his guitar and turned on the camera.

It was sweet and sad as Judy Fraley asked her youngest son questions he had learned not to try to answer.

“I’m getting very confused, honey … I don’t know myself.”

Fraley, 33, looked at his 70-year-old mother and reassured her the only way he knew how.

She smiled and kissed his cheek.

Ever since he began playing music, Fraley would write a song and immediately play it for his mom. She was his biggest fan. And when Alzheimer’s disease began to steal her memory, Fraley said, it was amazing to watch the effect of music on her, almost like a drug that relieved her tension and made her feel good, even as the disease changed her into someone new each week like a child growing up in reverse.

In the video, as Fraley starts to play, a smile spreads across his mother’s face and she starts to bounce. She’s singing along, beaming at him.

That was two months ago.

She hasn’t recognized him for a couple of weeks now. Last week, Fraley showed up at the Glen Park assisted living community for dementia and Alzheimer’s patients, in Monrovia, California, and began to play.

She walked out of the room.

As a release for his sadness, Fraley went on the social-sharing site Reddit Friday and posted the two-month-old video along with this message:

“I recently stopped bringing my guitar to my Mom’s home because she no longer recognizes me and doesn’t respond to it anymore. I wish I would have a played a lot more to her when she did.”

The video has been watched by more than 1.2 million people.

“I have never seen anything on the Internet as profoundly moving as this,” one commenter wrote on Reddit. “I know it’s just a short window into your life, but I feel as if your kind soul can be seen clearly. How much love your mama has for you, and how you comfort her is so beautiful.”

Fraley works as a technology coordinator for a Catholic high school in Montibello, California. He was a little embarrassed to share something so personal with the whole world — he feared perhaps he was exploiting his mother, and letting strangers see her at her worst — but having seen the response, he’s glad he posted it. He knew he had captured a special moment that encompassed the essence of who she was, what she was going through, and what he was going through all at once.

“To see your mom scared is the worst thing imaginable, and to see her falling away from you slowly it’s unreal,” he said. “You just have to be calm and smile and basically just comfort them as they go down, because you have no control over what’s happening.”

Judy Fraley was a therapist and healer who taught for over 30 years at different high schools in L.A. and the Art Center College of Design in Pasadena until she started having memory problems. She once appeared as a dream analysis expert on “The Marilu Henner Show”.

She began showing symptoms of memory loss a decade ago, but it took several years to get an official diagnosis of Alzheimer’s, her husband Joseph Sr. said. Joe Fraley moved in with his parents to help care for them.

Judy Fraley moved to the assisted living facility a few days after the video was shot, and since then has gone rapidly downhill.

Fraley said hundreds of people have written to him, sharing similar stories of what they’ve gone through and how the video reminded them of their parents. Somebody sent him a painting of Fraley and his mom, just based on the video.

Fraley has documented other touching moments throughout his mother’s illness, including the last thing she ever wrote and a poignant photo essay of his dad giving his mom her wedding ring at her new home in the assisted living community. In August, his parents will be married 50 years.

The song he plays in the video was written years ago before his mother was diagnosed.

“It’s about being really close to somebody and having them no longer there with you,” he said. “I wrote it about a girl, but it ended up being about my mom.”

Fraley’s dad said the video and the world’s response is the only positive thing to come out of an awful disease that’s stolen his wife and so many other people.

The support from people who’ve watched Fraley’s video has been so encouraging to him and his family that he said he will continue to play at his mother’s assisted living facility, even after she passes away.