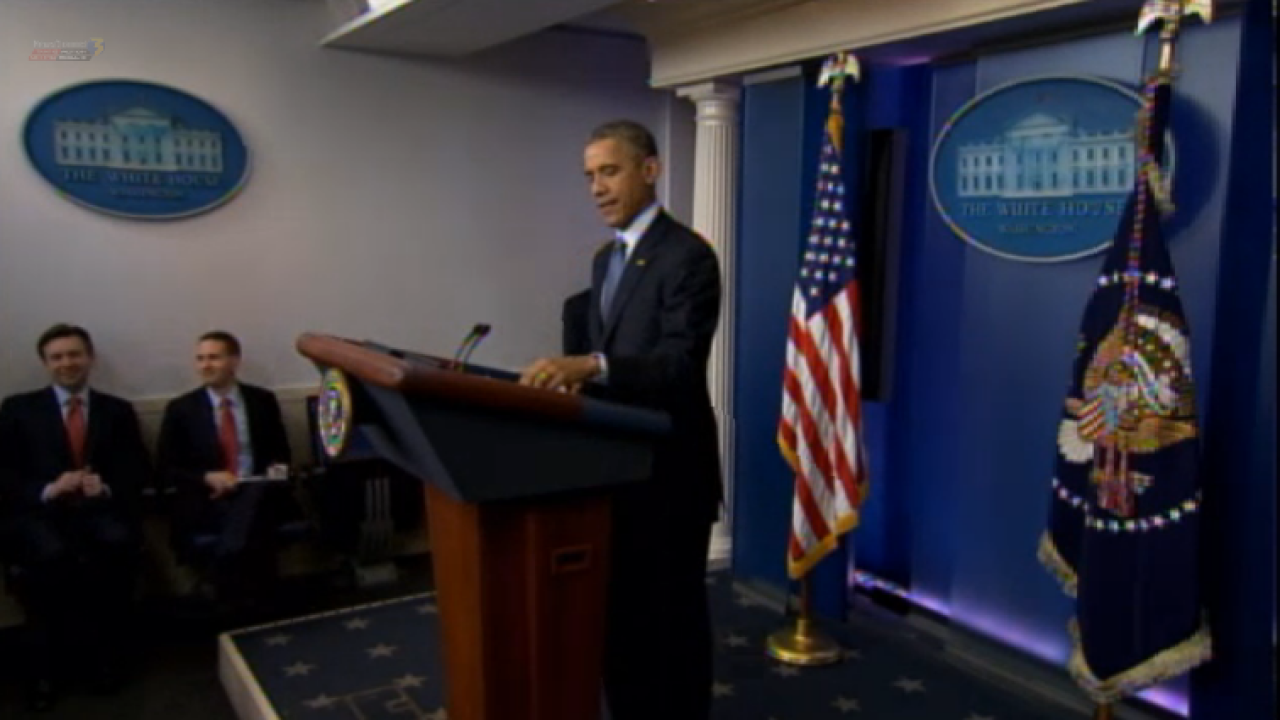 WASHINGTON (CNN) — President Barack Obama said that “really concrete, practical” law enforcement reforms will result from a review his administration is currently producing, and sounded an optimistic tone about preventing deaths like Michael Brown’s in Ferguson, Missouri and Eric Garner’s in New York City in the future.

“What I don’t think is always captured in our political debates is, the vast majority of people are just trying to do the right thing. And people are basically good and have good intentions,” Obama said Friday. “Sometimes our institutions and our systems don’t work as well as they should. Sometimes you’ve got a police department that has gotten into bad habits over a period of time and hasn’t maybe surfaced some hidden biases that we all carry around.”

“But if you offer practical solutions, I think people want to fix these problems,” he said. “This isn’t a situation where people feel good seeing somebody choked and dying. I think that troubles everybody. So there’s an opportunity of all of us to come together and take a practical approach to these problems.”

2:37 p.m. — President Barack Obama said the Keystone XL pipeline — which Republican congressional leaders have said they intend to approve legislation to authorize early next year — is “not even going to be a nominal benefit to U.S. consumers.”

Obama didn’t threaten to veto a bill that would take approval of the 1,179-mile, Canada-to-Texas pipeline out of the State Department’s hands. But he downplayed its potential effects and said that if Congress wants to create the kinds of construction jobs that could accompany the pipeline, it should instead approve bills to improve the country’s infrastructure.

“There’s very little impact, nominal impact, on U.S. gas prices — what the average American consumer cares about — by having this pipeline come through,” Obama said. “And sometimes, the way this gets sold is, ‘Let’s get this oil and it’s going to come here,’ and the implication is, it’s going to lower oil prices here in the United States — and it’s not. There’s a global oil market.”

2:29 p.m. — President Barack Obama threatened to veto legislation approved by the new Republican-led Congress that weakens his signature health care law or rolls back any of the 2010 Dodd-Frank financial services reforms.

“I think there are going to be some tough fights on those areas where we disagree,” Obama said. “If Republicans seek to take health care away from people who just got it, they will meet stiff resistance from me. If they try to water down consumer protections that we put in place in the aftermath of the financial crisis, I will say no, and I’m confident that I will be able to uphold vetoes on those types of provisions.”

He said he’d like to work with Republicans on items like expanding international trade and tax reform. But he said Congress and the White House will need to “compromise” in order for any legislation to become law.

2:23 p.m. — President Barack Obama said he wants to see the U.S. embargo against Cuba abolished, but that he doesn’t expect that to happen right away as “Congress digests” his move to thaw the two countries’ economic freeze.

“I think there’s going to be a healthy debate inside of Congress, and I will certainly weigh in,” Obama said. “I think that ultimately we need to go ahead and pull down the embargo, which I think has been self-defeating in advancing the aims that we’re interested in. But I don’t anticipate that that happens right away.”

He said the U.S.-Cuba relationship hasn’t yet developed to a point where Obama’s visiting Cuba or Cuban President Raul Castro visiting the United States is “in the cards.”

2:16 p.m. — President Barack Obama said he shares the concerns of dissidents and human rights groups about Cuba’s “hermetically sealed society,” but said his move to ease economic restrictions will lead to long-term change there — even if it happens in “fits and starts.”

“I don’t anticipate overnight changes. But what I know deep in my bones is that if you’ve done the same thing for 50 years and nothing’s changed, you should try something different if you want a different outcome, and this gives us an opportunity for a different outcome, because suddenly Cuba is open to the world in ways that it has not been before,” Obama said.

“Change is going to come to Cuba. It has to. They’ve got an economy that doesn’t work,” he said, noting that the country has long relied on

“The more the Cuban people see what’s possible, the more interested they are going to be in change. But how societies change is country-specific. It’s culture-specific,” he said.

2:12 p.m. — President Barack Obama said tax reform is “one area where we can get things done” even with Republicans set to take control of the House and the Senate.

He said staff-level conversations will take place between Obama’s White House and GOP congressional leadership between now and the Jan. 20 State of the Union address about individual and corporate tax reform. Obama said he’ll issue proposals of his own to overhaul the corporate tax structure.

“Then there are other companies that are paying zero because they’ve got better accountants or lawyers. That’s not fair,” he said. “There are companies that are parking money outside the country because of tax avoidance. We think it’s important that everybody pay something if they are effectively headquartered in the United States.”

2:05 p.m. — Sony “made a mistake” in halting the release of its film “The Interview” after hackers that the FBI has linked to North Korea stole the company’s documents and threatened theaters that showed the film.

“We cannot have a society where some dictator someplace can start imposing censorship here in the United States, because if somebody is able to intimidate folks out of releasing a satirical movie, imagine what they’ll do when they see a documentary that they don’t like, or news reports that they don’t like — or even worse, imagine if producers or distributors or others start engaging in self-censorship because they don’t want to offend the sensibilities of somebody whose sensibilities probably need to be offended,” Obama said.

“So, you know, that’s not who we are. That’s not what America’s about. Again, I’m sympathetic that Sony as a private company was worried about liabilities and this and that and the other. I wish they’d spoken to me first. I would have told them, do not get into a pattern in which you’re intimidated by these kinds of criminal attacks,” he said.

At a year-end news conference before he departs for a holiday vacation to Hawaii, Obama said a 57-month streak of job growth, producing 11 million new positions.

“As a country, we have every right to be proud of what we’ve accomplished: More jobs, more people insured, a growing economy, shrinking deficits, bustling industry, booming energy — pick any metric that you want; America’s resurgence is real. We are better off,” Obama said.

He said gas prices are 70 cents lower this year than they were last Christmas, and the Obama administration’s bailout of the automotive industry is “effectively over.”

“Yes, there were crises that we had to tackle around the world — many that were unanticipated,” Obama said. “We have more work to do to make sure our economy, our justice system and our government work not just for the few but the many. But there is no doubt we can enter into the new year with renewed confidence that America is making significant strides where it counts.”

He said he is “energized” and “excited” about the final two years of his presidency.

“We are better positioned than we have been in a very long time, and the future is ready to be written. We’ve set the stage for this American moment,” Obama said. “My presidency is entering the fourth quarter. Interesting stuff happens in the fourth quarter. And I am looking forward to it.”

Those comments came in his opening remarks.

Just weeks removed from huge Democratic losses in the midterm elections, Obama’s allies say he appears liberated. A President derided as overly cautious for much of the last six years — especially since the Republican wave of 2010 — is suddenly no longer hesitant to use every lever the Oval Office has to offer. He’s brokered a diplomatic breakthrough with Cuba, halted deportations for more than 4 million undocumented workers, green-lit Environmental Protection Agency restrictions on ozone emissions, endorsed net neutrality and extended talks with Iran to curtail its nuclear program. And that’s just been in the first six weeks since Democrats lost the Senate.

Obama is likely to face questions about a number of those issues at his year-end news conference — and more. Just hours before Obama was scheduled to start, the Federal Bureau of Investigation announced that it has pinned blame for the hack of Sony Entertainment on North Korea, raising questions about cybersecurity.

He could also face questions about Russia. The country’s ruble has tumbled to historic lows, and its central bank raised its interest rate to a stunning 17 percent this week — a downturn due to dropping oil prices and harsh Western sanctions on the country’s oligarchs and its banking, energy and defense industries imposed as a result of the country’s annexation of Ukraine’s Crimea region. Yet Russian President Vladimir Putin used a three-hour news conference of his own on Thursday to insist that the country wouldn’t back down.

Shortly after the news conference ends, Obama and his family will hop on Air Force One for a holiday vacation in Hawaii.