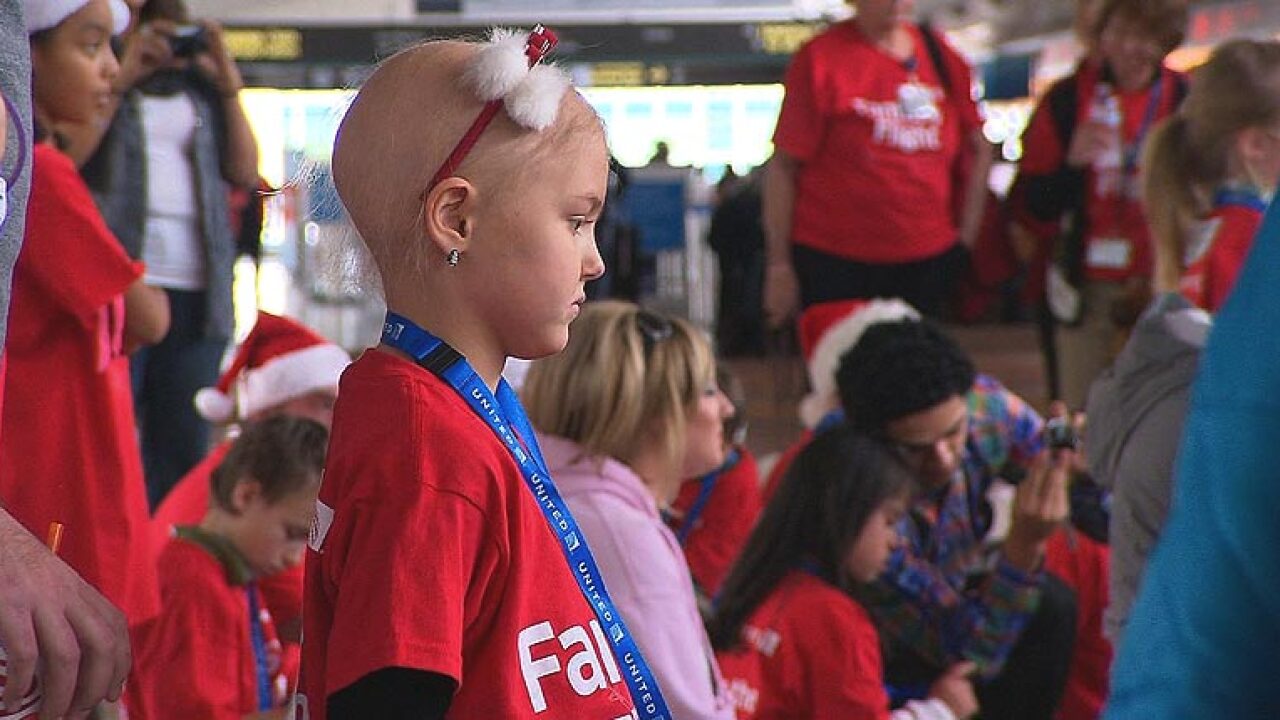 (CNN) — While most children wait and hope Santa visits them at home on Christmas Eve, this year dozens of Denver-area children went directly to the big man’s Arctic home turf.

The children, many of whom are being treated for serious illnesses or are victims of abuse or homelessness, were flown to the “North Pole” this holiday season on a Fantasy Flight.

The Fantasy Flight program began in 1992 at Washington’s Dulles International Airport, and has since spread to Los Angeles and other airports around the country. Though the destination may be fantasy, the flight is not. Airline employees and retirees volunteer their time, and United Airlines donates the jets.

At Denver International Airport, this year’s group of kids was greeted by United Airlines ticket agents, who had boarding passes ready to go — stamped with the code for the kids’ final destination: NTP.

After being entertained by a dance group and treated to lunch, the children and their families were escorted through airport security to their gate, where flight attendants and several pilots greeted them with Christmas carols.

Once on board the decorated plane, the kids buckled up for takeoff.

Rob Fiebig, whose 6-year-old daughter Paige has cancer, was overwhelmed with emotion at the chance to make her Christmas so special.

“This is such a wonderful day, to bring all of these kids together and many of them flying on a plane for the first time. We’re just so grateful,” Fiebig said.

His daughter spends one month every year receiving treatment at the Ronald McDonald House. When asked what she was looking forward to the most, Paige responded, “I’m just excited to see Santa and Mrs. Claus.”

After flying for about an hour, the “rocket plane” landed at the North Pole, where it was personally welcomed by Santa and all of his helpers. While the adults on board may have thought the scene resembled a huge, decorated airplane hangar, the kids knew better.

Singing and cheers filled the plane, and children jockeyed to meet their host.

Airbus pilot Capt. Paul Purkey has been at the controls of this particular Fantasy Flight several times and looks forward to taking the kids to the North Pole every year.

“The first time I saw it, it was breathtaking,” he said. “You have Santa on the hoist, going around the airplane, and the kids are mesmerized by the whole experience. It’s a wonderful adventure.”

After finally meeting the man responsible for bringing them so much joy, each child was sent home with a bag of gifts — one so large many of them needed help carrying it out.

“It’s really important for them to have this opportunity,” she said on the way. “These kids will talk about this all year long.”