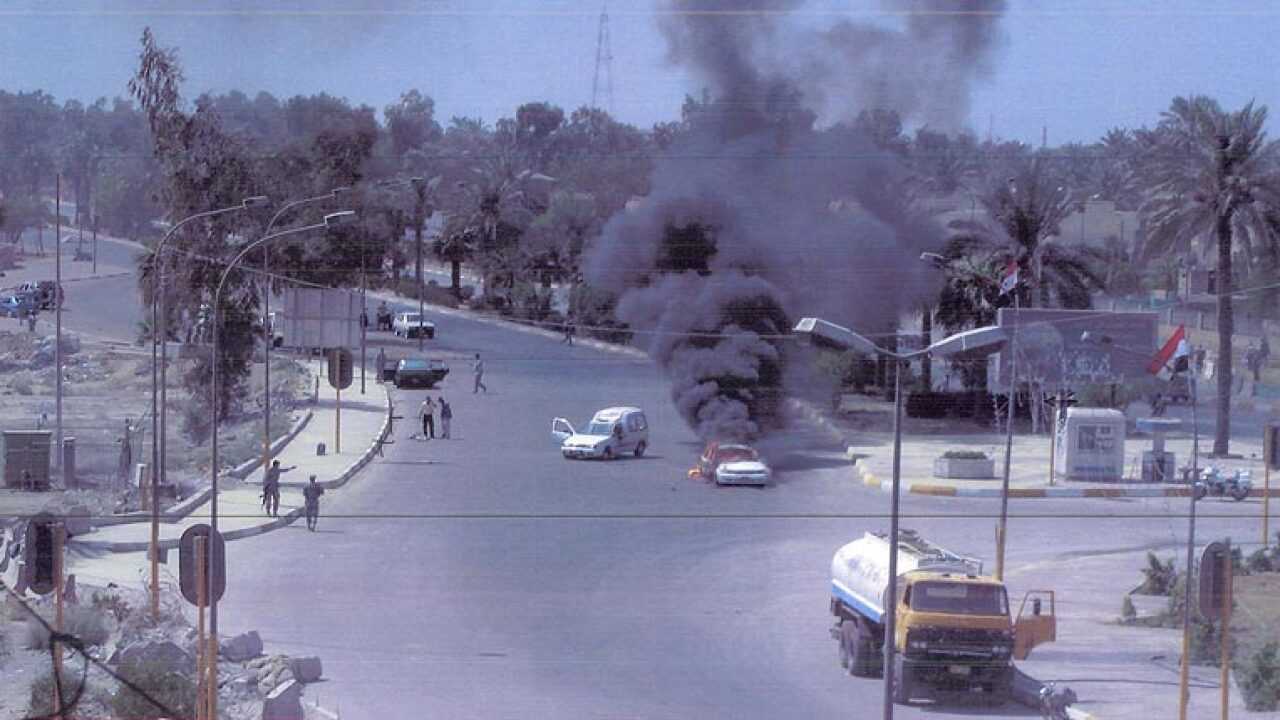 A government exhibit from the trial.

Nicholas Slatten, 30, of Sparta, Tennessee, the team’s sniper, was found guilty of first-degree murder while armed in the slaying of the driver of a white Kia sedan in the Baghdad traffic circle. Prosecutors said Slatten kicked off the incident when he opened fire.

— Paul Slough, 35, of Keller, Texas, was found guilty of 13 counts of voluntary manslaughter, 17 counts of attempted manslaughter and one firearms offense;

— Evan Liberty, 32, of Rochester, New Hampshire, was found guilty of eight counts of voluntary manslaughter, 12 counts of attempted manslaughter and one firearms offense;

— Dustin Heard, 33, of Maryville, Tennessee, was found guilty of six counts of voluntary manslaughter, 11 counts of attempted manslaughter and one firearms offense.

“This verdict is a resounding affirmation of the commitment of the American people to the rule of law, even in times of war,” Ronald Machen, U.S. Attorney for the District of Columbia, said in a statement.

“Seven years ago, these Blackwater contractors unleashed powerful sniper fire, machine guns and grenade launchers on innocent men, women and children. Today, they were held accountable for that outrageous attack and its devastating consequences for so many Iraqi families.”

The jury began deliberating September 2 after a trial that lasted more than two months. Seventy-one witnesses testified, including 30 from Iraq, the largest group of foreign witnesses to travel to the United States for a criminal trial, Machen’s statement said.

Wednesday marked jurors’ 28th day of deliberations, but one defense attorney said the case isn’t over.

“I expect we’re going to appeal, and we’re going to fight vigorously for him,” Liberty’s attorney, Bill Coffield, said after the verdicts were handed down.

Senior Judge Royce Lamberth ordered the men be detained pending sentencing. No date has been set.

Another contractor, Jeremy Ridgeway, pleaded guilty in 2008 to voluntary manslaughter and attempt to commit manslaughter and testified for the government. He is awaiting sentencing, the statement said.

‘Sudden quarrel and heat of passion’

Seventeen Iraqi civilians were killed that day at Nusoor Square, including 9- and 11-year-old boys. Fourteen of those killings were unjustified under the rules of the use of deadly force in Iraq by Iraqi security contractors.

The Justice Department alleged Slough, Liberty and Heard “unlawfully and intentionally, upon a sudden quarrel and heat of passion, did commit voluntary manslaughter” in the ensuing chaos when they opened fire.

The September 16, 2007, incident began when 19 Blackwater contractors were assigned to a convoy. After learning a car bomb had detonated in Baghdad, near where a U.S. official was being escorted, the team — known as Raven 23 — drove to a secured checkpoint.

“Once there, in disregard of an order from Blackwater’s command, the team’s shift leader directed Raven 23 to leave the Green Zone and establish a blockade in Nusoor Square, a busy traffic circle that was immediately adjacent to the Green Zone,” the prosecutor’s statement said.

Among those killed were a doctor, a used car salesman, a truck driver, a businessman, an Iraqi soldier, a gardener, a taxi driver and an aspiring doctor taking his mother to an appointment, according to prosecutors.

Blackwater said its convoy came under attack, and defense attorneys said in court that witnesses fabricated their stories. Witnesses countered that the contractors fired first and without provocation.

A federal judge in 2008 dismissed the original case, finding the Justice Department withheld key evidence and violated the contractors’ rights. But a federal appeals court later reversed that decision, leading the government to seek a fresh indictment and trial.

‘Street of the dead’

Some of the testimony was harrowing as witnesses recalled going about their days unsuspectingly when the bullets began to fly.

“I remember people strewn on the street — children, elderly men. This is what I saw with my own eyes. The street turned into the street of the dead,” one witness said.

Attorney Hasan Jaber was driving to work when he got trapped in traffic at the square. That’s when the shooting started. Like many others, he tried to flee, but he was shot three times.

“It was horror,” he said. “People running out of their cars were being shot at. … Anything that moved in Nusoor Square was shot. Women, children, young people, they shot everyone.”

Blackwater had a $1 billion government contract to protect American diplomats at the time.

In 2007, congressional hearings were held on possible misconduct by Blackwater, and then-owner Erik Prince was vilified by Congress.

“I believe we acted appropriately at all times,” Prince testified before Congress.