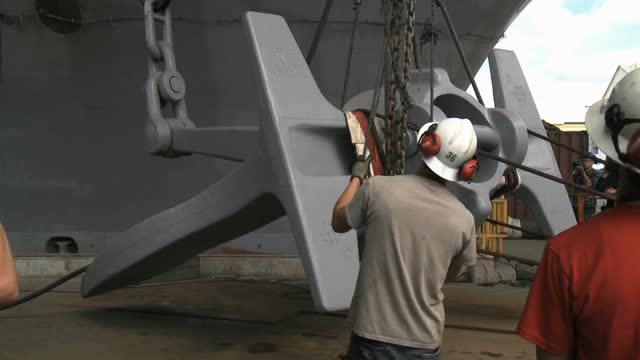 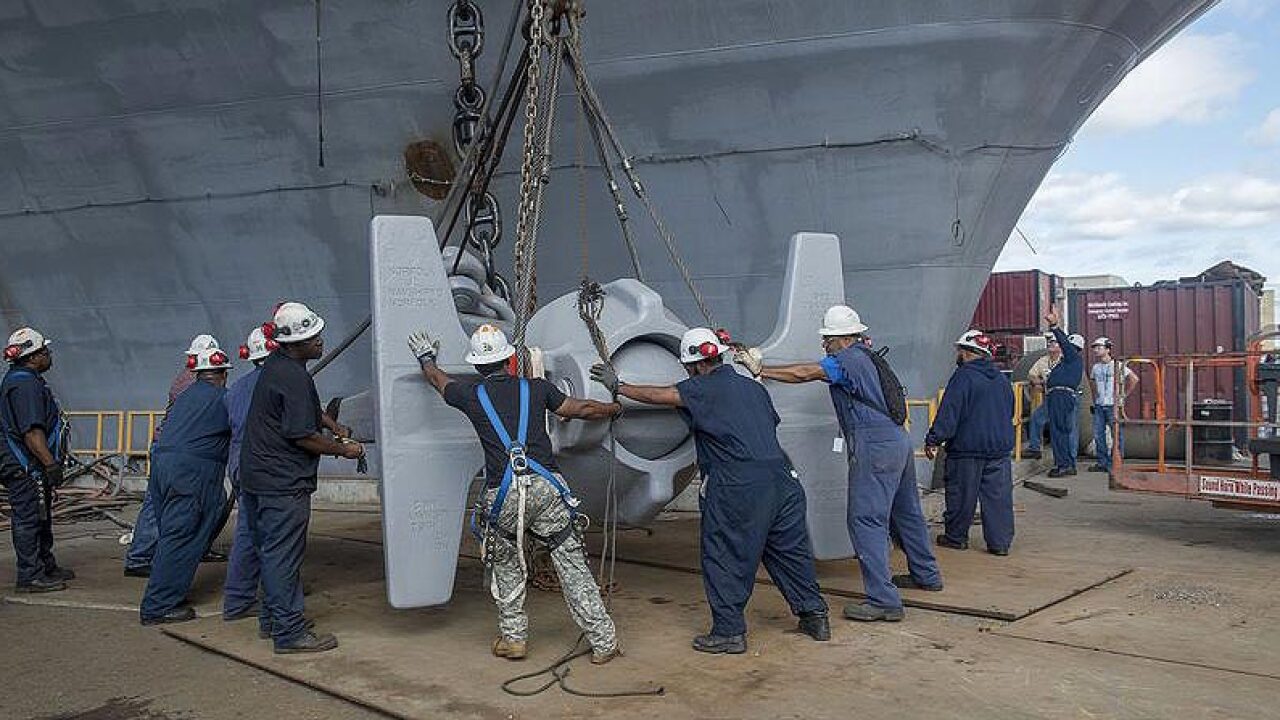 Newport News, Va. - A piece of the inactivated aircraft carrier USS Enterprise will live on aboard the much younger USS Abraham Lincoln.

Newport News Shipbuilding recently installed one of The Enterprise’s 30-ton anchors on the Lincoln.

The Lincoln is undergoing its refueling and complex overhaul in a dry dock a few hundred yards from where the Enterprise is being prepared for decommissioning, During this multi-year process, every inch of the carrier is updated or refurbished, including its two massive anchors.

A team of shipbuilders replaces USS Abraham Lincoln’s anchor with one removed from USS Enterprise. Lincoln is undergoing a refueling and complex overhaul at Newport News Shipbuilding at the same time Enterprise is being inactivated. Photo by Ricky Thompson/HII

During the overhaul process, shipbuilders’ inspections found that one of the Lincoln’s anchors needed to be replaced, so shipbuilders swapped out the old anchor for one of Enterprise’s. The anchor, cast in 1962 and weighing in at 30 tons, is an exact twin of Lincoln’s other, much younger, anchor.

With two working anchors, sailors aboard Lincoln will be able to test the carrier’s anchor-lift system during sea trials scheduled for 2016.

“The legacy of Enterprise will live on in her sailors, her shipbuilders and now in the anchor aboard Lincoln,” said Chris Miner, Newport News’ vice president of in-service aircraft carrier programs. “The ships are reaching important milestones in their lives; Lincoln will finish her mid-life RCOH, and Enterprise will finish her inactivation, both in 2016. With this anchor, both ships will be linked, and Lincoln will carry Enterprise’s spirit as it returns to the fleet.”

The Lincoln arrived at Newport News in March 2013 to begin the RCOH process. During the carrier’s RCOH, the shipyard refuels the ship’s reactors, paints the ship’s hull, modernizes systems and performs a complete recapitalization of the entire ship.

Once the RCOH is complete, The Lincoln will continue to operate in the Navy fleet for another 25 years. Lincoln’s RCOH is 45 percent complete and on track for delivery in October 2016, according to a press release from Newport News Shipbuilding.