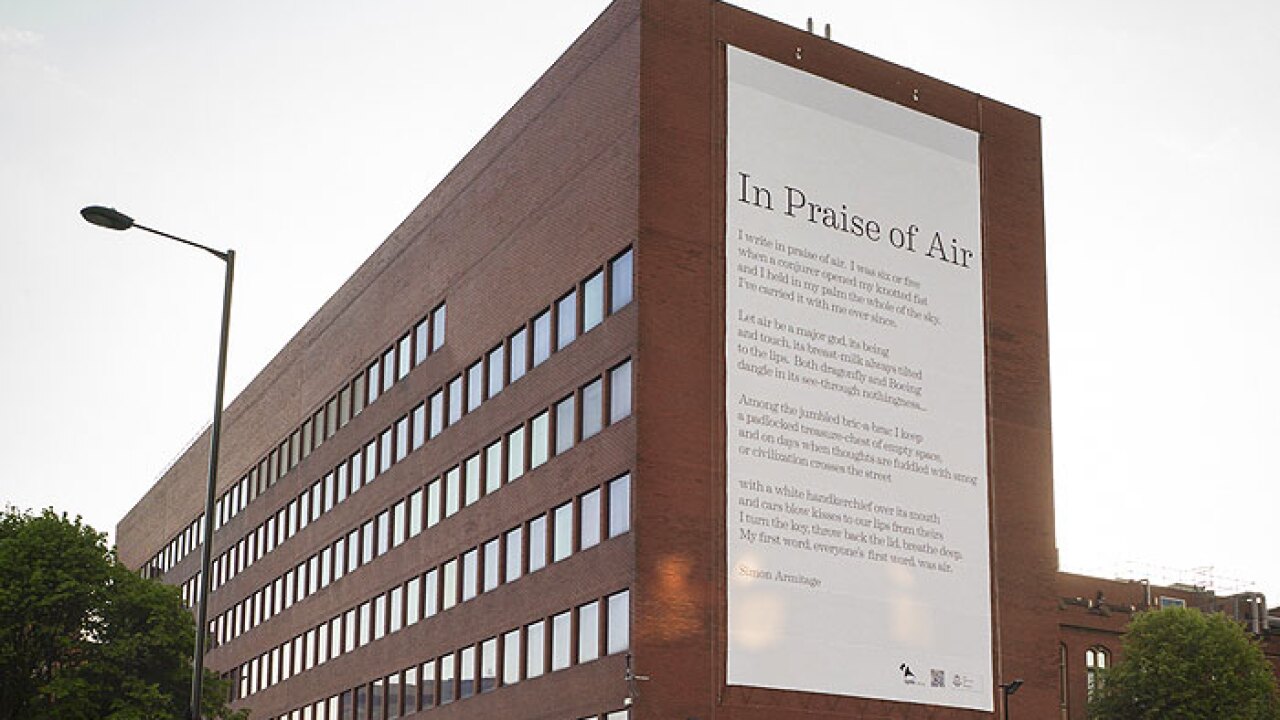 Simon Armitage’s poem “In Praise of Air” in Sheffield is printed on a banner coated with titanium dioxide nano-particles that can neutralize the effects of 20 cars each day.

Simon Armitage’s poem “In Praise of Air” in Sheffield is printed on a banner coated with titanium dioxide nano-particles that can neutralize the effects of 20 cars each day.

(CNN) – Air pollution is now the biggest global environmental killer, the WHO has confirmed. The seven million deaths it caused in 2012 exceeded the victims of cigarettes, and is more than double previous estimates.

Air pollution in over half of 1,600 cities surveyed is now above safe limits of Particulate Matter (PM), with the highest cost borne by the poorer regions of South-East Asia and the Western Pacific.

In Delhi, found to have the worst pollution in the world, around 10,000 people die prematurely each year because of pollution. Most of these perish through strokes, heart conditions, and cancer, and the issues are multiplying.

“We are now seeing a large number of lung impairments and respiratory problems among children,” says Anumita Roy Chowdhury, head of the Clean Air Program at India’s Center for Science and Environment. “There is a strong correlation with emergency hospitalizations in winter when the pollution is high.”

But although there is widespread agreement that restricting emissions is an effective solution, badly affected cities are increasingly turning to technological solutions. The Manuel Gea González Hospital in Mexico City unveiled a “smog-eating” facade last year, covering 2,500 square meters with a titanium dioxide coating that reacts with light to neutralize elements of air pollution. Designers claim it negates the effects of 1,000 cars each day.

An even grander project, the Palazzo Italia, will use similar materials over 13,000 square meters across six floors when it opens in Milan in 2015. Dutch scientists have also adapted the system to roads, claiming this can reduce pollution by 45%.

The material is not prohibitively expensive — adding as little as 4-5% to construction costs. But the impact of such buildings has been limited to their immediate location, and efforts to develop the concept have led to more novel, personalized solutions.

The first pollution-eating poem appeared this May in Sheffield, England, a 20-meter banner of Simon Armitage’s “In Praise of Air,” coated with titanium dioxide nano-particles that can counteract around 20 cars’ worth of pollution each day. While it is a creative tool for promoting a local poetry festival, it also serves as proof of concept that the technology can be incorporated into practically any textile, and will be reproduced on several more banners and posters in the coming months.

But the ultimate goal is to render us all air-purifying units. The poem is an offshoot of Catalytic Clothing, a collaboration between designer Helen Storey and polymer chemist Tony Ryan that aims to incorporate titanium dioxide nano-particles into laundry detergent, so that our outfits are coated.

“Clothes are the way to do it because they are ubiquitous,” says Ryan. “In the city of Sheffield we need to get rid of 1,000 tons of nitrogen dioxide (NO2) each year to comply with air quality regulations, which is around three tons per day.”

The concept relies on mass participation. Ryan says that one person wearing clothes washed in the detergent could remove 5-6 grams of NO2 from the air every day — which means Sheffield’s population of just over half a million could collectively enable the city to meet its NO2 target.

One drawback is that the laundered material would not distinguish between atmospheric impurities, so that expensive perfume would be neutralized as well as smog, which has been an issue for manufacturers. There have also been suggestions that the particles could be an irritant, although Ryan — who has been testing the product on himself — denies this.

A more immediate, easier option is becoming available through a personal pollution monitor. The MicroPEM sensor developed by the Research Triangle Institute (RTI) picks up a range of exposure data to help the user manage risk.

Early trials have focused on detecting indoor pollution from cook stoves in the developing world, which account for over two million deaths per year through exposure to toxic smoke, most commonly through respiratory diseases. But the device could be applied to a wide range of environments, to indicate a wide range of health threats.

“For many diseases we haven’t determined whether one component (of pollution) is more causal than another,” says lead developer and RTI environmental exposure expert Dr. Charles Rodes. “But this can measure for diseases with rapid responses like asthma or pulmonary disease where it doesn’t have to be specific, we just measure total exposure to particles of a certain size (PM).” In the case of asthma, among the most common pollution-related conditions, an attack can follow soon after exposure, and early warning can save lives.

Rodes believes a personalized approach to monitoring can reach the people most vulnerable to air pollution better than stationary systems. “It’s the intersection between the most exposed and the most susceptible that tells you most about the environmental threat — and personal level measurement is about the only way to find out.”

The scientist is confident that the technology is moving from the lab environment toward public availability, following trials at academic institutions in the United States, United Kingdom and China. The units currently cost around $2,000 but will come down with demand, although there may be trade-offs to make it accessible. “If you want something that’s easy to use it tends not to be as accurate or specific,” says Rodes.

Nonetheless, its makers claim the MicroPEM will be the most sophisticated mobile pollution measurement tool available. While smartphone apps are proliferating, their functions are basic.

Biomimicry could also provide a meaningful sensor. Zoologist Dr. Fritz Vollrath of the University of Oxford has worked with spiders to draw inspiration from their materials and methods, and believes the sensitivity of their webs is unsurpassed.

“The thinness and electrical charge of the fibers allows them to catch any particles flying through the air, and the liquid coating is like a glue (that binds them),” says Vollrath. The web is sensitive enough to capture “individual spores and atoms.”

Vollrath believes a synthesized silk web would be a perfect tool for capture and measurement of pollutants, to reveal the extent of danger in the atmosphere. This could be tested by a chemical probe to provide a detailed breakdown of what has been caught. He envisages such a web could be used anywhere from disaster zones to hospitals and homes — “a mesh near the source of pollution — such as over the chimney.” His concepts are already being realized.

Crowdsourcing and citizen science are also offering solutions. Chinese innovators launched the FLOAT project that gave concerned citizens the chance to take air quality readings using pollution-sensing kites, and then submit the results to a database for findings to be shared. Similar citizen alliances are taking to the skies from London to Philadelphia.

For all the futuristic possibilities, this may be the most effective action citizens can take. “Putting data out means more accountability,” says Dr. Carlos Dora, Coordinator of Interventions for Healthy Environment at the WHO, pointing out that governments can reverse the effects of pollution if they are committed — such as in Berlin, where private cars have been restricted in some areas, or Beijing, where factories scaled down for the 2008 Olympics, triggering a marked improvement in air quality.

The full truth, with the pressure that brings to bear on authorities that are still empowered to effect change, could yet reverse the deadly plague of pollution.