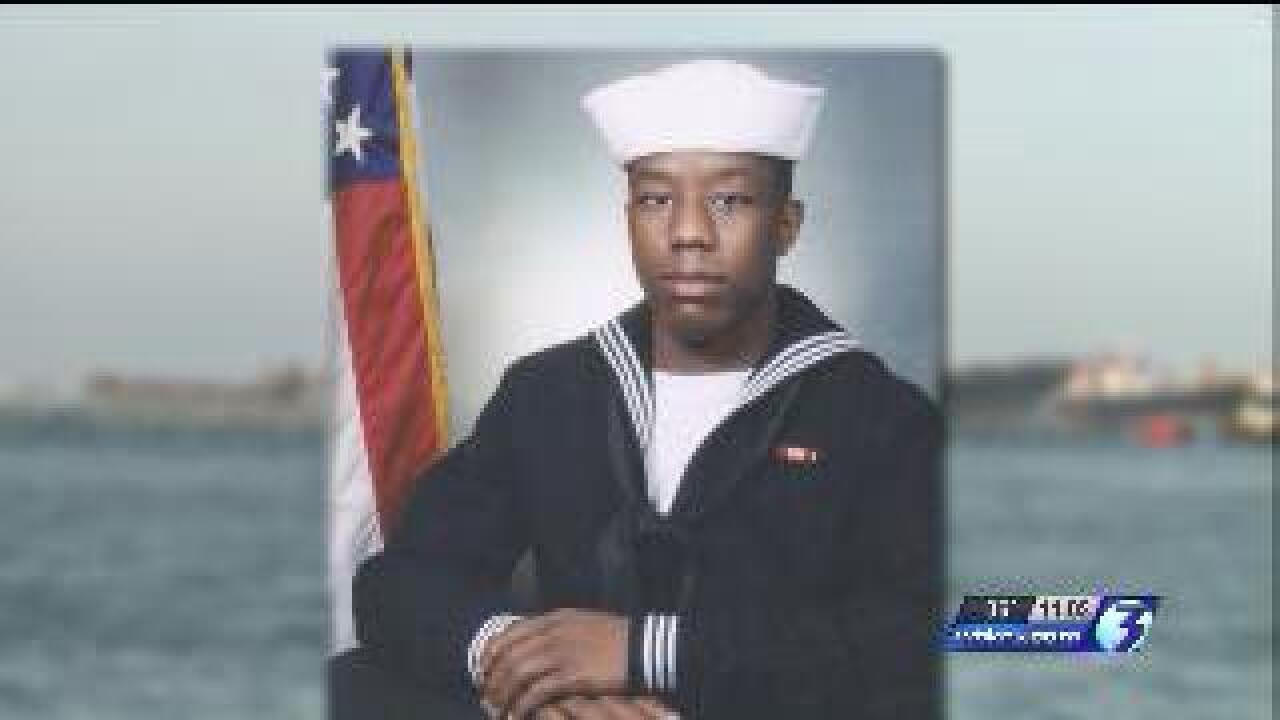 Norfolk Naval Base commander Robert Clark said the young sailor sacrificed himself to save others.

"It was incredibly extraordinary," says Clark.

The shooting happened around 11:20pm Monday night at Pier 1 onboard the USS Mahan.

The Navy says 35-year-old civilian truck driver Jeffrey Tyrone Savage drove a 2002 Freightliner through Gate 5 just after 11:00 p.m., proceeded to Pier 1, and attempted to board the USS Mahan.

Savage was confronted by ship security personnel who ordered him to stop. A struggle broke out and Savage managed to disarm the Petty Officer of the Watch.

Mayo was serving as Chief of the Guard and was in the vicinity of the Mahan when the struggle broke out. He immediately responded to render assistance and engaged in gunfire with Savage.

"He jumped into the way between the gunman and the petty officer of the watch. She fell to the ground. He covered her and he basically gave his life for hers," says Clark.

Savage fatally shot Mayo before turning the gun on other nearby security personnel. The other security forces shot and killed Savage.

Savage did have a valid Transportation Worker Identification Card (TWIC) but that alone does not allow base access.

The ongoing NCIS investigation has revealed that Savage had no reason or authorization to be on base.

The chain of events that allowed Savage entry to the installation and the ship are under investigation.

CLICK HERE TO LEAVE CONDOLENCES FOR MA MARK MAYO
Officials: Accused Navy shooter was not supposed to be allowed access to base
TWIC card allows civilians with criminal histories access to base

There are still a lot of questions about what happened and why, but what Mayo did is undisputed.

"Doing that, that's something he would do,” says Virgil Savage, a fellow sailor and close friend of Mayo. “He always stood up for the little guy."

"Everybody loved him,” he says. “Wherever you were at, whether he worked at the armory or waterside, he kept you laughing."

Savage says Mayo was known for his upbeat personality as well as his dedication to duty.

Naval Station Norfolk was briefly on lockdown for approximately 45 minutes as a precautionary measure after the shooting.

With the exception of Pier 1, all operations have returned to normal at Naval Station Norfolk.

The circumstances surrounding the shooting are under investigation by NCIS and Naval security forces.

Rear Adm. Harley is currently serving as the President, Board of Inspection and Survey based in Norfolk.

"Our thoughts and prayers go out to the family, friends and shipmates of our sailors who were killed Monday night," said Gortney. "I have directed a second investigation to be conducted in addition to the law enforcement investigation led by Naval Criminal Investigative Service."

"The safety and security of our sailors, civilians, and families is paramount, and it is imperative that we are taking all appropriate and necessary measures to ensure their safety," said Gortney.

"Petty Officer Mayo's actions on Monday evening were nothing less than heroic. He selflessly gave his own life to ensure the safety of the Sailors on board USS Mahan (DDG 72)," said Capt. Robert E. Clark, Jr., commanding officer, Naval Station Norfolk. "Petty Officer Mayo's family has endured a tremendous loss, as have the men and women of Naval Station Norfolk, in the loss of a shipmate and friend."

A Hagerstown, Md. native, Mayo enlisted in the Navy in Oct. 2007 and reported to Naval Station Norfolk in May 2011.

Mayo had been a standout wrestler in high school before joining the Navy. He was stationed in Bahrain and Rota, Spain before coming to Norfolk.