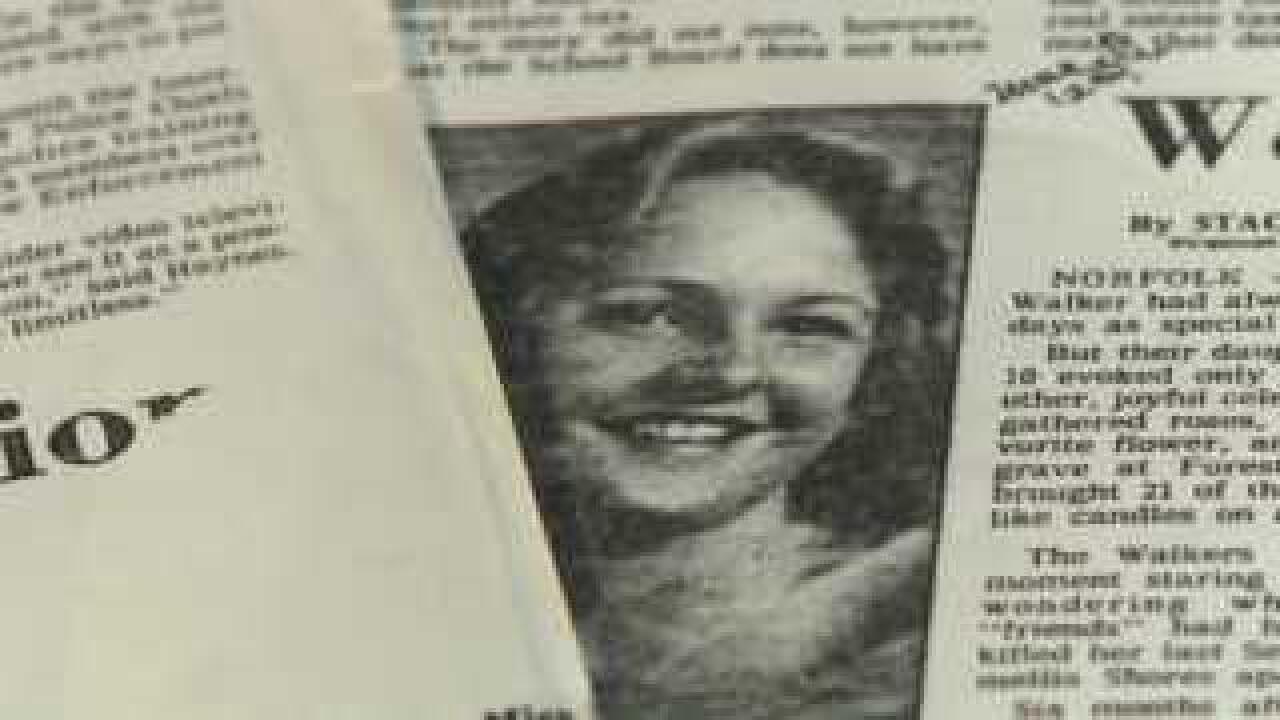 Frustrated that police never caught the killer, Al and Frances Walker asked NewsChannel 3 to look into the case, to see if there is anything that can be done to find out who murdered their daughter Donna 32 years ago.

"I just got tired of calling, going down there, and nothing happening," Al Walker said of his frustration with police in the 1980s. He said for months and years after someone stabbed Donna to death on Sept. 4, 1981, he stayed in constant contact with Norfolk detectives. He even led a push that boosted a reward to $7,000. But he says, detectives shut him out, revealed almost nothing, and never solved the case.

"I even went out and hired private detectives," he said. "Because we thought they weren't doing the job."

Witness statements obtained by NewsChannel 3 show someone who knew Donna by name is the likely killer. A neighbor reported that a long-haired man was knocking on doors in an Ocean View apartment building, calling Donna's name. Eventually, that person knocked on Donna's door, called her name, and she opened the door. The next morning, Donna missed a hair appointment for a friend's wedding. Her father went looking for her and found her stabbed to death on the floor of her apartment.

"It's really hard for anybody to find their child dead," Al said, sobbing. "I can't describe how hard it is, how much you go through when something like that happens."

Al and Frances Walker asked NewsChannel 3 to research the case. An autopsy report shows Donna suffered several cuts on her hands and arms, what police call "defensive wounds." They're an indication Donna was fighting back against the man who was stabbing her. In struggles like this, it is common for the killer to leave behind DNA evidence. In 1981, however, police had no idea what DNA evidence was.

But now, departments across the country are reviewing these old files, looking for evidence that could be re-examined with the newest DNA technology. On behalf of the Walkers, NewsChannel 3 asked Norfolk Police Chief Michael Goldsmith in writing if he would commit to a search of Norfolk's old evidence in this case, to see if any was suitable for retesting. NewsChannel 3 sent that letter on Oct. 10 but the chief never responded. We then sent several follow-up emails to the Norfolk Police public-information office. On Tuesday, Officer Chris Amos responded by email:

"The Chief is not available for an interview but I can tell you the case is being reviewed by investigators in our Cold Case Squad. They will be contacting Mr. Walker. If they can use today's advances in science to solve an older homicide they most certainly will."

On Thursday, just hours before the story aired, police contacted NewsChannel 3 to get the Walkers' phone number.

Al and Frances Walker say they are desperate for answers. They are worried they will go to their graves without knowing who sent Donna to hers.

"It just hurts real bad," Frances said. "You have a knot in your heart, and part of your heart is missing."

Al Walker said of the killer: "He took something away from me and my family that can never be replaced. Ever."

If you have any information that NewsChannel 3 could use to help the Walkers, email Investigative Reporter Mike Mather at mike.mather@wtkr.com.