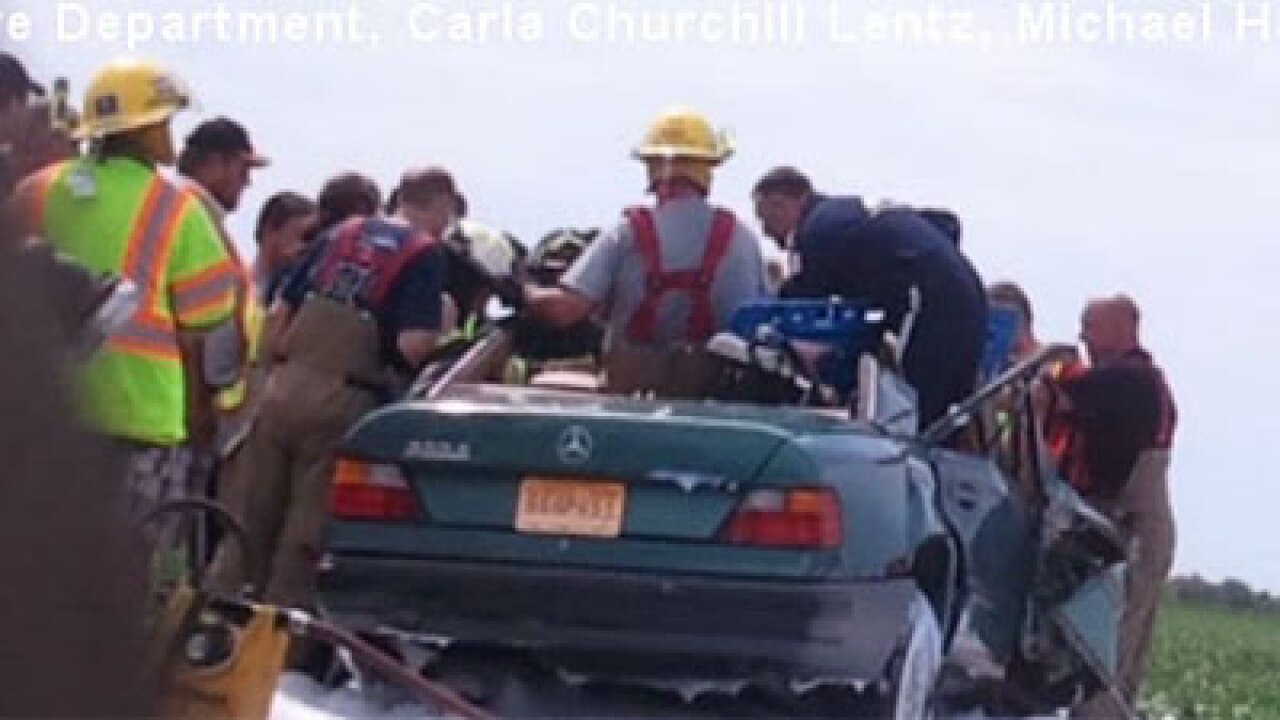 QUINCY, IL (KHQA) – Rescue workers are still scratching their heads over the identity of a mysterious priest who inexplicably appeared at the scene of a car crash. Emergency officials had been working for about an hour using every tool at hand to free Katie Lentz, 19, from a smashed car.

A police officer from the scene says the situation looked bleak before the priest came out of nowhere to pray with the crash victim.

“The fire chief, Raymond Reed, had stepped back and came up to me and said he was concerned cause he was out of options. His tools weren’t working and by that time, it as almost an hour and said I don’t know how we’re going to get her out. I said, ‘Raymond, I promised her mother and her that we’d get her out. We have to get her out, and he said I know and went back.” said Ralls County Sheriff’s Deputy Richard Adair.

Ten minutes later, Katie asked those around her to pray out loud with her. That’s when they say a priest walked up from the north part of the highway. No one saw how he got there.

Reed says the highway was blocked for two to three miles, and emergency responders were not letting anyone past the road blocks.

“He came between and he asked to anoint the girl in the car. My first thought was that it would possibly send the wrong message to Katie that maybe we had called a priest and thought she wasn’t going to make it. So I went back and talked to the priest and told him we were worried she would think we’d given up hope. He said, ‘I just want to anoint her and so we just let him come up to the scene.” said Sheriff’s Deputy Richard Adair.

Witnesses say he anointed Katie and her rescuers with oil, prayed with them, asking them to remain calm and saying that the crew’s workers would work.

The Hannibal fire department pulled up with fresh equipment and was able to free Katie. After getting her in the Air Evac helicopter, rescue workers said the priest was no where in sight. New London Fire Chief Raymond Reed says the department ended up taking 80 photos of the scene. He says the priest did not appear in any of them.

“I’ve done this a long time, and that’s probably the most horrific accident that I’ve ever seen, that a human survived. 27 years a police officer and I’ve never seen a person as strong as she was.” said Sheriff’s Deputy Richard Adair.

The Diocese of Jefferson City says it has not located the priest involved. “Out of respect for the privacy of any priest who may have been involved and does not wish to come forward, the Diocese does not plan to further investigate this incident. The Diocese is grateful that a priest was able to exercise his ministry in this manner and requests prayers for healing of the victim, as well as prayers of thanks.” said Deacon Dan Joyce.

After being freed from the car, Lentz was rushed to the hospital, where she underwent a number of surgeries, according to USA Today. She has been upgraded from critical to serious condition.

A 26-year-old man was arrested and faces several charges, including second-degree felony assault and driving under the influence, according to a state highway patrol report cited by USA Today.