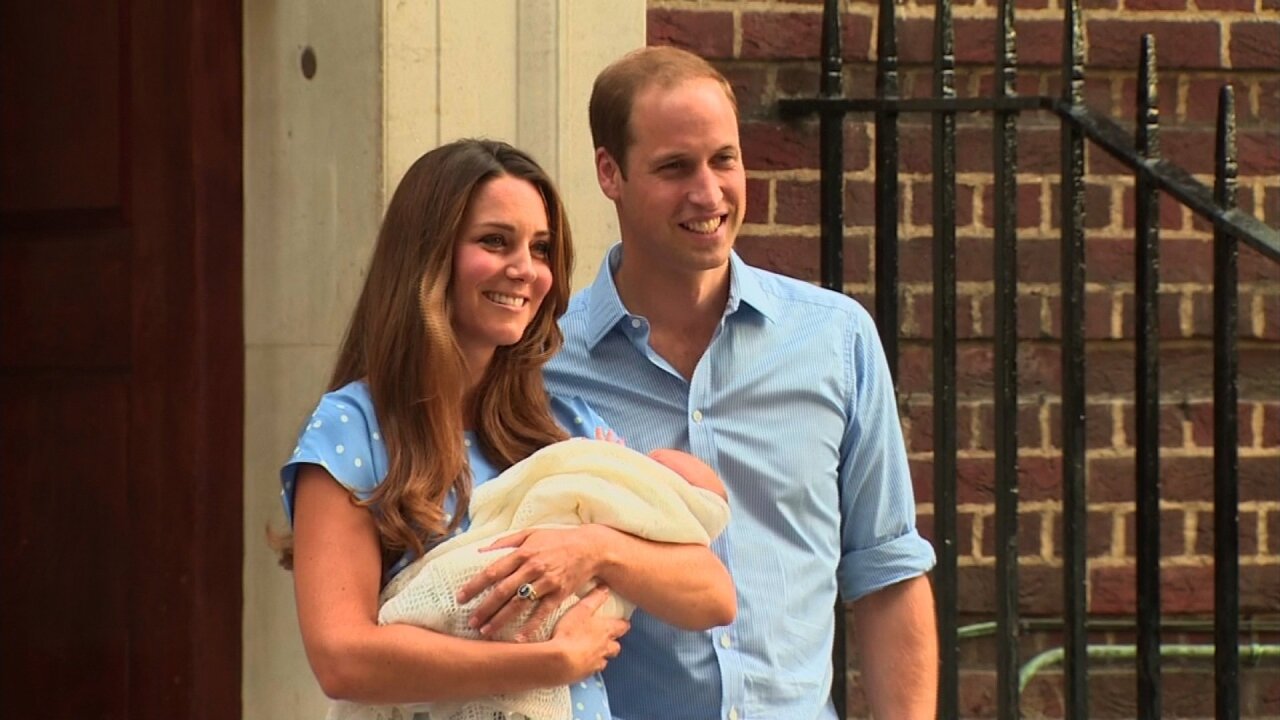 The Duke and Duchess of Cambridge made their first public appearance Tuesday evening after the birth of their son, holding the still-unnamed boy to cheers from a crowd outside St. Mary’s Hospital.

All eyes are glued Tuesday to the hospital where Catherine, Duchess of Cambridge, and husband Prince William welcomed their first child as a joyful public waits for its first glimpse of the new royal heir.

The couple will leave St. Mary’s hospital Tuesday evening with the boy, who was born Monday, Kensington Palace said. A name has not yet been announced for the child, who is third in line to the British throne.

“Their Royal Highnesses would like to reiterate their thanks to the hospital for the care and treatment they have all received,” a statement from the palace read.

They could appear holding their son on the same steps where Diana, Princess of Wales, and Prince Charles gave the world its first sighting of Prince William 31 years ago. Charles came to the hospital for a brief visit with his first grandchild Tuesday evening, accompanied by his wife Camilla, the Duchess of Cornwall. He told reporters it was “marvelous.”

She said both mother and baby are doing “really well” and that she and her husband were “so thrilled” at being grandparents.

A Kensington Palace spokesman said: “Mother, son and father are all doing well this morning.” Queen Elizabeth II’s gynecologist, Marcus Setchell, is at the hospital carrying out medical assessments of Catherine following the birth, the palace said earlier.

Meanwhile, guardsmen at Buckingham Palace, the queen’s residence, played the Cliff Richard song “Congratulations” to mark the birth of the royal baby at the Changing of the Guard. The military ceremony, much beloved of tourists, involves a new guard exchanging duty with the old guard in the palace forecourt.

Crowds were gathered again outside Buckingham Palace, a day after they thronged there to see the formal notice announcing the baby’s birth.

At the same time the bells of Westminster Abbey, where William and Kate were married in April 2011, began to peal, in keeping with royal tradition, and were set to continue for more than three hours.

The news of the boy’s birth, announced about four hours after the event Monday, prompted cheers and celebrations among the crowds of well-wishers outside Buckingham Palace. At least one group of well-wishers brought flowers, champagne and a card for the Duke and Duchess of Cambridge.

Social media networks were also abuzz with the news, which made headlines around the world.

‘We could not be happier’

The new parents spent some time with their baby before calling family members — starting with the queen — to announce the birth, a Kensington Palace source told CNN royal correspondent Max Foster.

“We could not be happier,” said Prince William, according to the Kensington Palace source.

Prince William remained at Catherine’s side throughout the labor, and the baby was born naturally. An official bulletin was placed on a gilded easel outside Buckingham Palace.

The celebrations for the arrival of the new prince — whose title will be His Royal Highness Prince (the baby’s name) of Cambridge — were hard to miss in the capital.

The fountains at Trafalgar Square were dyed blue; the BT Tower, a London landmark, flashed the words “It’s a boy;” and the London Eye was illuminated in patriotic red, white and blue.

Further afield, Canada — where the British monarch is head of state — turned its side of the Niagara Falls blue to mark the birth, and the CN Tower in Toronto was lit up the same color.

Betting on a name

It was a long wait for the media camped outside St. Mary’s Hospital, but when the news of the birth finally came, the excitement of the moment was huge.

The Sun newspaper, Britain’s best-selling tabloid daily, changed its masthead Tuesday to “The Son” to mark the occasion, above a picture of the official birth announcement, while the Daily Express and Telegraph emblazoned “It’s a boy” across their front pages.

Recognizing that excitement over the prince’s arrival is not universal, the Guardian newspaper’s website lets users switch to a royal baby-free version of the home page. The front page of UK satirical magazine Private Eye simply says: “Woman has baby.”

Many bets are being placed as the wait continues for the baby’s name to be announced. British bookmakers Ladbrokes have James as favorite, followed by Henry and George, Philip, Alexander and Richard.

The baby’s name may be announced when the family leaves the hospital, CNN’s Foster reported. William’s name was announced a few days after birth, his brother Harry’s on departure from hospital.

Some British parents have delayed naming their newborns in recent days in hopes of either copying or avoiding the royal name, he said.

The baby is third in line for the throne now occupied by the queen. Her son, Charles, will succeed her, followed by his son, William.

Members of the royal family expressed their happiness at the safe delivery.

“Both my wife and I are overjoyed at the arrival of my first grandchild. It is an incredibly special moment for William and Catherine, and we are so thrilled for them on the birth of their baby boy,” Prince Charles and wife Camilla said in a statement.

The official British Monarchy Twitter feed said: “The Queen and Prince Philip are delighted at the news of the birth of The Duke and Duchess of Cambridge’s baby.”

Charles Spencer, brother to the late Diana, Princess of Wales, welcomed the birth of the baby. “We’re all so pleased: it’s wonderful news,” he said in a statement.

“My father always told us how Diana was born on just such a blisteringly hot day, at Sandringham, in July 1961. It’s another very happy summer’s day, half a century on.”

British Prime Minister David Cameron said, “It is an important moment in the life of our nation, but I suppose above all, it’s a wonderful moment for a warm and loving couple who got a brand new baby boy.”

Tributes around the world

Thanks to a change agreed by the leaders of the Commonwealth countries in 2011 and passed into law this year, the baby’s place in the order of succession would have been the same regardless of gender. Previously, boys automatically trumped female siblings, so a first-born daughter could be pushed out of line by a younger brother.

The British monarch is also head of state in 15 Commonwealth countries, including Australia, Canada, New Zealand, Belize and Jamaica.

Canadian Prime Minister Stephen Harper offered his country’s congratulations on the birth of a future king.

“The arrival of the newest member of the Royal Family, a future Sovereign of Canada, is a highly anticipated moment for Canadians given the special and warm relationship that we share with our Royal Family,” he said in a statement.

“The child enters the world at a time of promise and opportunity for our two nations,” the president and first lady said in a statement. “Given the special relationship between us, the American people are pleased to join with the people of the United Kingdom as they celebrate the birth of the young prince.”

On Twitter, topics related to the royal baby jumped to the top of the trending list in the United Kingdom on Monday morning. Worldwide, hashtags such as #RoyalBabyBoy and #Will & Kate were trending later Monday.

In a nod to modern times, Clarence House called for people to send news and images of any other new arrivals using the hashtag #WelcometotheWorld.