Update: Two dead, all other passengers accounted for after Boeing 777 crashes at San Francisco International Airport 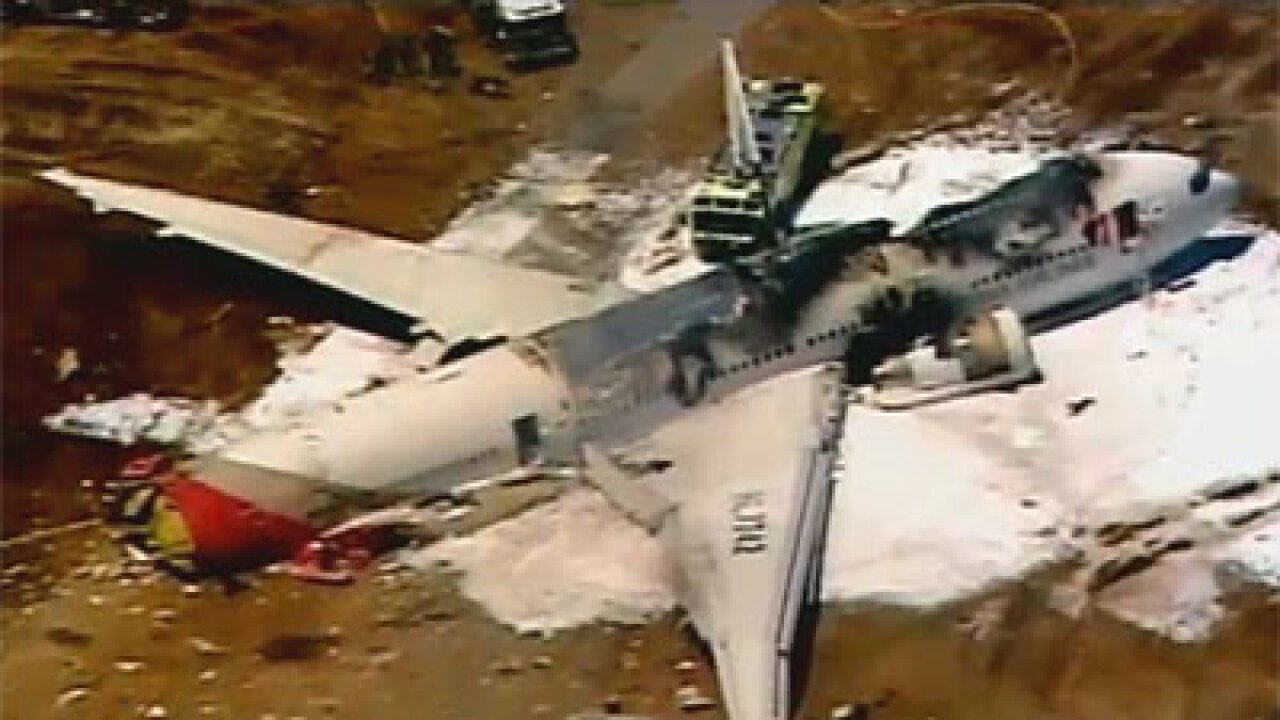 Live Video from the crash scene

Update: All passengers have been accounted for.  Many were found coming out of nearby water. Authorities believe that they may have been trying to douse themselves in water due to the fire on the plane.

Two people died after a Boeing 777 from South Korea crashed Saturday upon landing at San Francisco International Airport, sending up a huge fireball and spinning before finally coming to a stop — having lost its tail and, eventually, much of its charred roof.

Asiana Airlines Flight 214 left Seoul’s Incheon International Airport earlier Saturday, according to FlightAware, a website that offers tracking services for private and commercial air traffic. An airline spokesman in Seoul told CNN that 291 passengers and 16 staff members were aboard.

San Francisco General Hospital spokeswoman Rachael Kagan said that facility was expecting another 15 patients. At least 10 who were already in that hospital — eight adults and two children — were in critical condition. Tents have been set up outside the hospital’s emergency department.

The U.S. Coast Guard has transported one person to Stanford Hospital, said Corrine Gaines of the military branch.

Air traffic control audio — between the airport’s tower and Flight 214 crew members — suggested that those on the ground knew there was some sort of problem, promising that “emergency vehicles are responding.”

One of those on the flight, Elliott Stone, told CNN that he thought the plane was approaching “a little high (then came) down a little sharp.

“All of a sudden, boom, the back end just hit and flies up into the air and everyone’s head goes up the ceiling,” said Stone, who added that he ended up jumping out the plane without using the stairs or an evacuation slide.

Anthony Castorani, who witnessed the landing from a nearby hotel, said he saw the plane touch the ground then noticed a larger plume of white smoke.

“You heard a pop and you immediately saw a large, brief fireball that came from underneath the aircraft,” he told CNN.

Kristina Stapchuck saw the dramatic scene unfold from her seat on a plane on the airport tarmac. Soon after Flight 214 touched down, “it looked like the tires slipped a little bit and it rocked back,” she told CNN.

Parts of the plane began to break off as it rocked and then began to spin.

“It all happened so suddenly,” Stapchuck told CNN.

A photo provided to CNN by Eunice Bird Rah — and shot by her father, who was a passenger on the plane — shows flames and smoke bursting out of many of the aircraft’s windows.

Rah’s father knew something bad was coming, he told his daughter, telling her that the pilot appeared to try to raise the plane at the last minute. Rah said her father “is doing fine, thank God,” but noted that others appeared to be hurt.

Video taken soon after the crash and posted on YouTube showed dark gray smoke rising from the plane, which appeared to be upright. That smoke later became white, even as fire crews continued to douse the plane.

CNN iReporter Timothy Clark was on an eighth-floor balcony of a nearby hotel when he heard the noise and saw a “dust cloud.”

“Then people running from the plane, then flames,” Clark said.

A photograph posted to Twitter shows what appear to be passengers walking off the plane, some of them toting bags, as smoke rises from the other side.

“I just crash landed at SFO,” read the accompanying message from David Eun. “Tail ripped off. Most everyone seems fine. I’m ok. Surreal…”

The top of the aircraft was charred and, in spots, gone entirely, according to video from CNN affiliate KTVU. The plane was on its belly, with no landing gear evident and the rear tail of the plane gone.

Debris settled from the water’s edge, along San Francisco Bay, up to where the plane eventually came to a stop.

Fire trucks were on site; first responders could be seen walking outside the aircraft.

Evacuation slides could be seen extending from one side of the aircraft, from which there was no apparent smoke.

According to Asiana Airlines, 141 of the passengers who were aboard Flight 214 are Chinese, 77 are South Korean and 61 are American.

Sheryl Sandberg, Facebook’s chief operating officer and author of the book “Lean In,” was supposed to be one of them, she wrote on her Facebook page. But she’d switched instead to a United flight, arriving about 20 minutes before the Asiana flight crashed.

Flights diverted to other airports

The Bay Area airport was closed to incoming and departing traffic after the crash, the Federal Aviation Administration said on its website, adding that the time when it’s expected to reopen is unknown.

Flights destined for San Francisco’s airport — known by its call letters, SFO — were being diverted to airports in Oakland, Sacramento, San Jose and Los Angeles, said Francis Zamora from the San Francisco Department of Emergency Management.

In an official tweet around 3:30 p.m., San Francisco International Airport said that two of its runways had reopened.

There were a few clouds in the sky around the time of the crash, and temperatures were about 65 degrees, according to the National Weather Service. Winds were about 8 miles per hour.

The National Transportation Safety Board is sending a “go team” that will be led by chairwoman Deborah Hersman to investigate the crash, the agency said. Boeing is “preparing to provide technical assistance” to investigators, company spokesman Miles Kotay said in a statement.

“We have not determined what the focus of this investigation is yet,” NTSB chairwoman Deborah Hersman said shortly before leaving Washington for San Francisco to lead her agency’s probe. “Everything is on the table at this point.”

There are no signs of terrorism related to the crash, a national security official told CNN. President Barack Obama was at Camp David when he learned about the crash, a senior White House official said.

Asiana Airlines — one of South Korea’s two major airlines, the other being Korean Air — is investigating the cause of the crash, a company spokesman told CNN.

The airline received the plane involved in the incident in 2006, according to the Aviation Safety Network. The aircraft has two Pratt & Whitney engines, it said.

Asiana operates many of its flights out of Incheon International Airport, which is the largest airport in South Korea and considered among the busiest in the world.

According to information on Asiana Airlines’ website, the company has 12 Boeing 777 planes. The airliners have a seating capacity of between 246 and 300 people and had a cruising speed of 555 mph (894 kph).