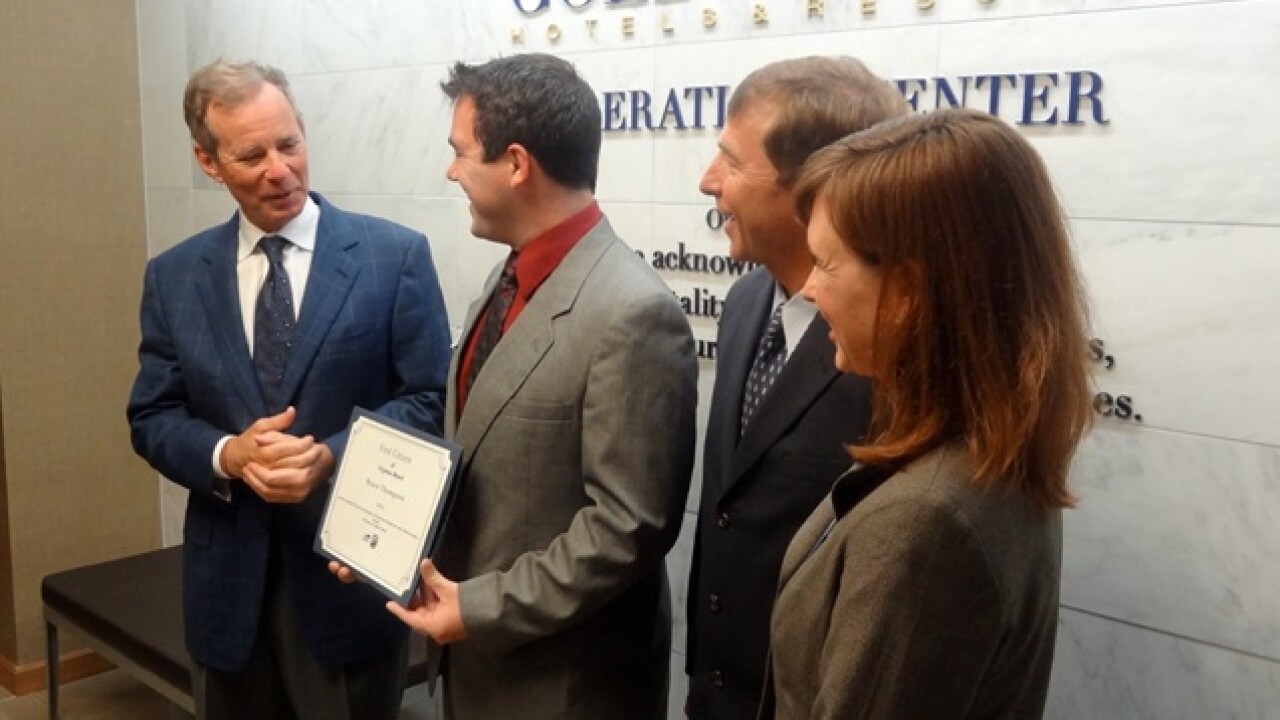 Virginia Beach, Va. – The Virginia Beach Jaycees have chosen longtime hotelier and civic leader Bruce Thompson as their 2012 Virginia Beach First Citizen, according to a news release issued on Tuesday.

Thompson, Chief Executive Officer of Gold Key PHR Hotels & Resorts, joins 61 prior honorees that have devoted their time, talents, and leadership to benefit Virginia Beach and its citizens, says Kathleen Pearson of the Virginia Beach Jaycees.

“Bruce Thompson has not only been a force in the city’s tourism industry but he has also made significant contributions to causes important to him and the area,” said Andrew Thomas, President of the Virginia Beach Jaycees, who presented Thompson with a certificate designating him as the First Citizen at Gold Key PHR’s headquarters off Laskin Road. As a result of his son Josh’s continuing battle with ALS, Thompson helped organized the annual JT Walk to Defeat ALS, which has raised over $5 million. “That Bruce has been able to continue being an outstanding corporate and community leader throughout this crisis is a tribute to his resolve and character,” wrote Gold Key Vice President Bob Howard in a letter supporting the nomination.

Virginia Beach Jaycees officials say Thompson was also instrumental in the creation of Grommet Island Beach Park and Playground on the oceanfront at 1st Street, the first fully accessible facility of its kind for the disabled, and has given generously to a host of other organizations, including the Virginia Aquarium, the Virginia Gentlemen, Virginia Beach Neptune Festival and the Hampton Roads Chapter of the National Multiple Sclerosis Foundation. In addition he has served on the EVMS Foundation Board of Trustees, Resort Leadership Council and the Virginia Small Business Financial Authority.

“Bruce’s personal and professional accomplishments speak for themselves,” wrote former Virginia Beach Councilman Linwood Branch in his nomination letter. “I don’t believe there could be a more worthy or deserving honoree because he is someone who has truly made our city a better place to live.”