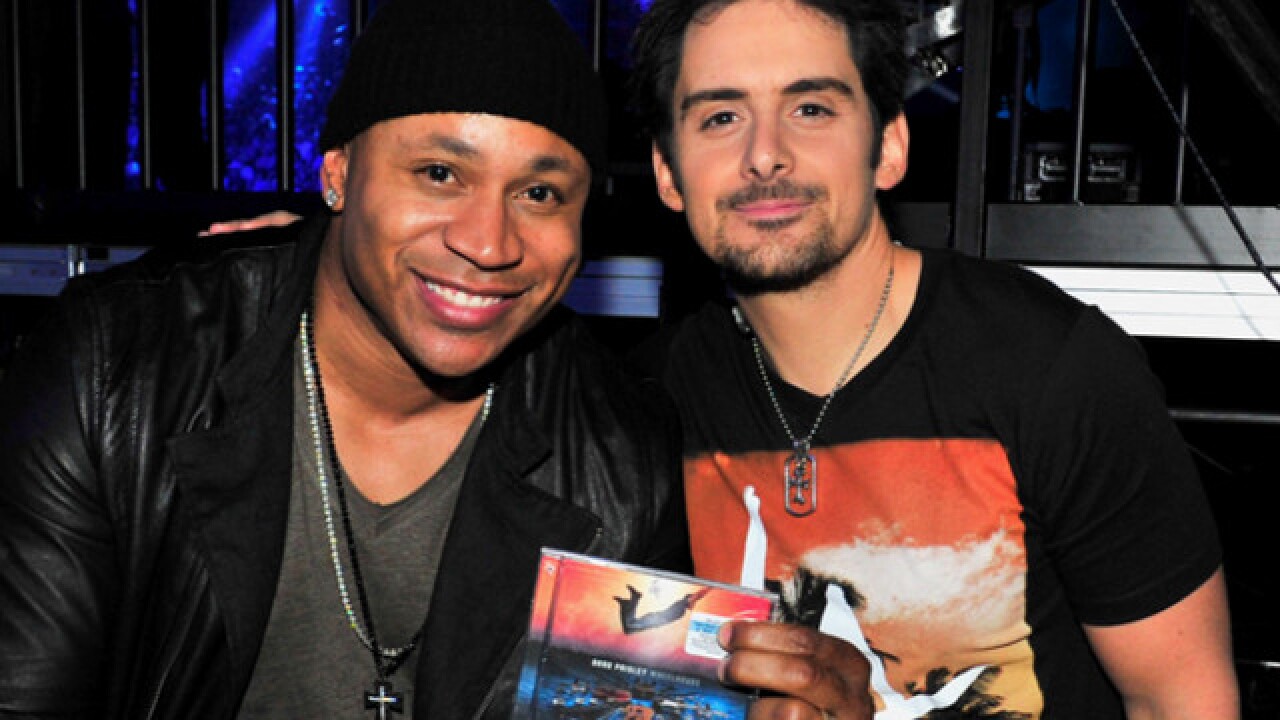 The track is part of Paisley’s new album, “Wheelhouse,” and was sparked by the reaction the country star said he received after he wore a shirt with the Confederate flag on it to showcase his adoration for the band Alabama.

“I was called a racist on Twitter for that,” Paisley told The Tennessean. “That was the beginning of this song: Me thinking, ‘Am I a racist? Is that all it takes?'”

And so, with “Accidental Racist,” Paisley and LL Cool J are hoping to launch a dialogue about prejudice, the South and it’s history with race relations.

Paisley sings from the perspective of a “a white man coming to you from the Southland, trying to understand what it’s like not to be,” as the lyrics say. The song paints the picture of a guy who walks into a Starbucks wearing a shirt like one Paisley himself has worn, and finding that it was like walking an elephant into the room.

“Just a proud rebel son with an old can of worms, looking like I got a lot to learn,” Paisley croons. “I’m proud of where I’m from, but not everything we’ve done, and it ain’t like you and me can rewrite history. Our generation didn’t start this nation.”

LL Cool J offers takes another point of view, rapping, “Dear Mr. White Man, I wish you understood what the world is really like when you’re living in the hood. Just because my pants are sagging doesn’t mean I’m up to no good; you should try to get to know me, I really wish you would.”

Chris Willman, who wrote the book “Rednecks and Bluenecks: The Politics of Country Music,” told The Tennessean he fond the song “pretty radical,” but Gawker saw it differently, likening it to an “11th grade A.P. History project.”

Salon found it “bizarre,” and to The Hairpin, “the song itself is a lyrical disgrace filled with awkward non-apologies and faux-pensiveness over the history of racism in the south.”

Paisley has explained that he doesn’t think they “answer the questions in this song,” perhaps chiefly because he says he doesn’t “know the answers.” But, he told Entertainment Weekly, “Accidental Racist” isn’t a stunt.

“At this point, after all these albums and all these hits, I have no interest in phoning it in, and I think that [the song] comes from an honest place in both cases, and that’s why it’s on [‘Wheelhouse’] and why I’m so proud of it … This isn’t something that I just came up with just to be sort of shocking or anything like that. I knew it would be, but I’m sort of doing it in spite of that, really.”

Instead, he created it “because it just feels more relevant than it even did a few years ago,” he said. “I think that we’re going through an adolescence in America when it comes to race. You know, it’s like we’re almost grown up. You have these little moments as a country where it’s like, ‘Wow things are getting better.’ And then you have one where it’s like, ‘Wow, no they’re not.’ … This is a very sensitive subject, and we’re trying to have the discussion in a way that it can help.”

To the man that waited on me at the Starbucks down on Main, I hope you understand When I put on that t-shirt, the only thing I meant to say is I’m a Skynyrd fan The red flag on my chest somehow is like the elephant in the corner of the south And I just walked him right in the room Just a proud rebel son with an ‘ol can of worms Lookin’ like I got a lot to learn but from my point of view

I’m just a white man comin’ to you from the southland Tryin’ to understand what it’s like not to be I’m proud of where I’m from but not everything we’ve done And it ain’t like you and me can re-write history Our generation didn’t start this nation We’re still pickin’ up the pieces, walkin’ on eggshells, fightin’ over yesterday And caught between southern pride and southern blame

They called it Reconstruction, fixed the buildings, dried some tears We’re still siftin’ through the rubble after a hundred-fifty years I try to put myself in your shoes and that’s a good place to begin But it ain’t like I can walk a mile in someone else’s skin

Dear Mr. White Man, I wish you understood What the world is really like when you’re livin’ in the hood Just because my pants are saggin’ doesn’t mean I’m up to no good You should try to get to know me, I really wish you would Now my chains are gold but I’m still misunderstood I wasn’t there when Sherman’s March turned the south into firewood I want you to get paid but be a slave I never could Feel like a new fangled Django, dodgin’ invisible white hoods So when I see that white cowboy hat, I’m thinkin’ it’s not all good I guess we’re both guilty of judgin’ the cover not the book I’d love to buy you a beer, conversate and clear the air But I see that red flag and I think you wish I wasn’t here

Oh, Dixieland (The relationship between the Mason-Dixon needs some fixin’) I hope you understand what this is all about (Quite frankly I’m a black Yankee but I’ve been thinkin’ about this lately) I’m a son of the new south (The past is the past, you feel me) And I just want to make things right (Let bygones be bygones) Where all that’s left is southern pride (RIP Robert E. Lee but I’ve gotta thank Abraham Lincoln for freeing me, know what I mean) It’s real, it’s real It’s truth