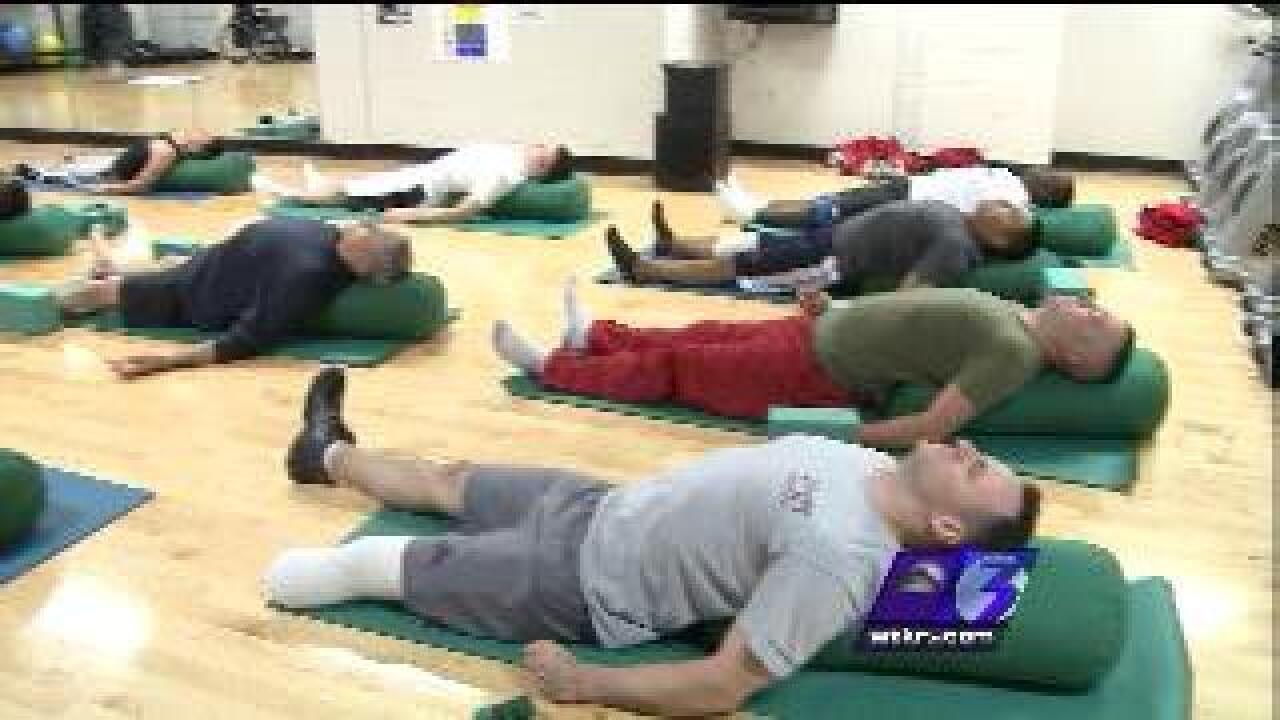 An adaptive yoga class may be the only peaceful moment these Marines experience throughout their day, even though the stretching, balancing, deep breathing and relaxing is all a challenge.

"As Marines, we kind of have a stigma about things like this," said Sgt. Allan Olson.

This class is an alternative therapy for the Marines at Naval Medical Center Portsmouth.

This yoga class is a step forward on their road to recovering from the visible scars some brought home from war, and from the emotional scars you can't see.

"I have real bad anxiety. And the nightmares... I don't sleep very well," Olson said. "It's hard to control my anger. So, I get frustrated extremely easy."

"One day it will slowly creep up on you and before you know it, it's out of control," SSgt. Mario Spencer said.

"I didn't want to admit that I was having problems," Olson said.

Olson did three combat deployments to Iraq in 10 years.

His anxiety, anger and violent war-related nightmares came to a head about six months ago when Olson says he snapped and had a breakdown.

Doctors are now evaluating him for traumatic brain injury, too.

He's only been to a few yoga classes and is already seeing the benefits necessary to becoming a less stressed and more focused husband and father.

"Yoga is great because it slows me down, slows the mind down, slows my body down, and I can actually just relax," Olson added.

"What they're going through is unparalleled in our history. Make no mistake about that. We were tough but these men and women, they're being asked to do things that we've never asked our service people to do before," said retired Rear Admiral Tom Steffens.

He has been doing yoga for 15 years and brought the Exalted Warrior Foundation to NMCP.

He partnered with his yoga instructor Ann Stevens, owner of Studio Bamboo in Virginia Beach, to kick start this adaptive yoga program more than two years ago.

"It's all focused on healing them and returning them to service, or helping them transition back to their civilian lives," Steffens said.

"There's so much injury or so many issues, that you have to be able to adapt for each person," Stevens added.

Stevens grew up in Hampton Roads and sees her work with these Marines as a way of giving back to our military community.

"All of these men and women give to all of us so selflessly and what a better way to give back, especially with what they've endured coming back," she said.
"When you watch them and see them persevere and work to bring themselves back to health, it makes you proud to be an American," Steffens said.
Olson says what he appreciates most about yoga so far is the nap time at the end.

For more information on the Exalted Warrior Foundation, visit http://www.exaltedwarrior.com/