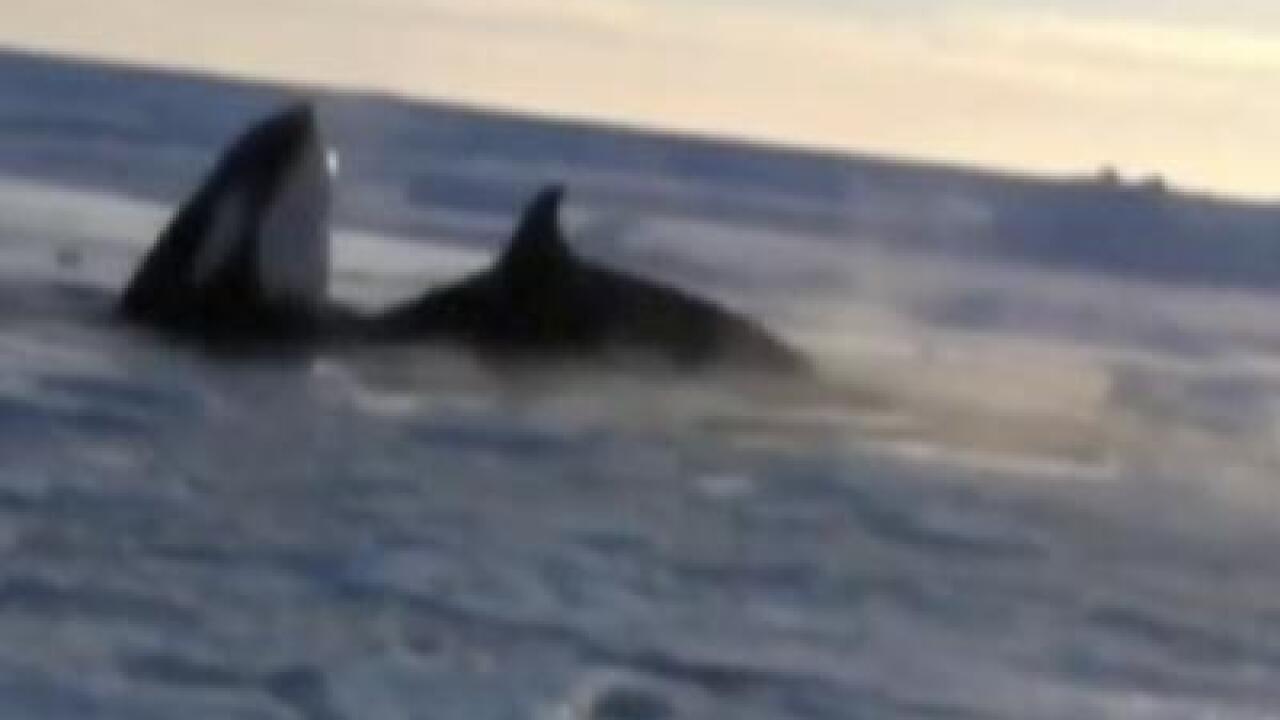 (CNN) — Time is running short for a pack of killer whales trapped by ice near a small Canadian village on Hudson Bay, the town’s mayor said Wednesday.

The 11 whales are confined in a space of about 30 feet by 30 feet, where they use an opening for a breathing hole, Inukjuak Mayor Petah Inukpuk said.

The orcas were discovered Tuesday morning by a northern Quebec seal hunter. The two large and nine smaller killer whales are at least 6 miles (10 kilometers) from open water, the mayor said. They appear to be part of a family pack.

The Canadian government is sending experts to the scene Thursday to see whether the orcas can be saved, CNN affiliate CBC reported.

A whale expert told the network that killer whales normally leave the Arctic before ice moves in. No one has seen any that far north in January before, said Christian Ramp, a researcher with the Quebec-based Mingan Island Cetacean Study.

The part of the bay near Inukjuak, which has about 1,500 residents, only froze over in the past few days, the mayor said.

At a town meeting Wednesday night, about 60 people discussed what to do.

“We have decided to give aid as much as possible so that those killer whales have a better chance of surviving,” Inukpuk said. “The local people will be taking out the blocks of ice around the whales (on Thursday). They will also be cutting the ice into blocks to enlarge the water.”

Ideally, an icebreaker would come clear a path for the whales, he said earlier in the day, but crews are a 36-hour trip away.

A spokeswoman for the Department of Fisheries and Oceans told CBC the ships were busy in other parts of the country and the team it is sending will examine the situation and consult with the town on what to do.

If the hole, through which the whales frequently surface and take breaths, freezes over, the orcas will die.

“It’s heart-breaking to witness these pictures, but it’s probably occurring more often than we think.”

The incident is reminiscent of a 1988 rescue where three gray whales were trapped near Barrow, Alaska. The story made national news for several nights and was the inspiration for the 2012 film “Big Miracle.”

Two of the three whales made it to open water after rescuers used chain saws and de-icers from a Wisconsin company to create more breathing holes for the whales and a Soviet icebreaker cleared a path through the thickest ice.

Inukpuk has been in touch with the company that helped save the whales in Alaska.

Ray Lee, the president of Kasco Marine, said he had two employees and several de-icers on standby in case they are needed.

“They are packed and ready to go,” he said. “They can keep the water open or melt the ice.”

The de-icers use a 3/4 horsepower motor to power a propeller that brings warmer water up from lower depths, he said.

Lee said he waiting on a call from the mayor, which likely will come Thursday morning.