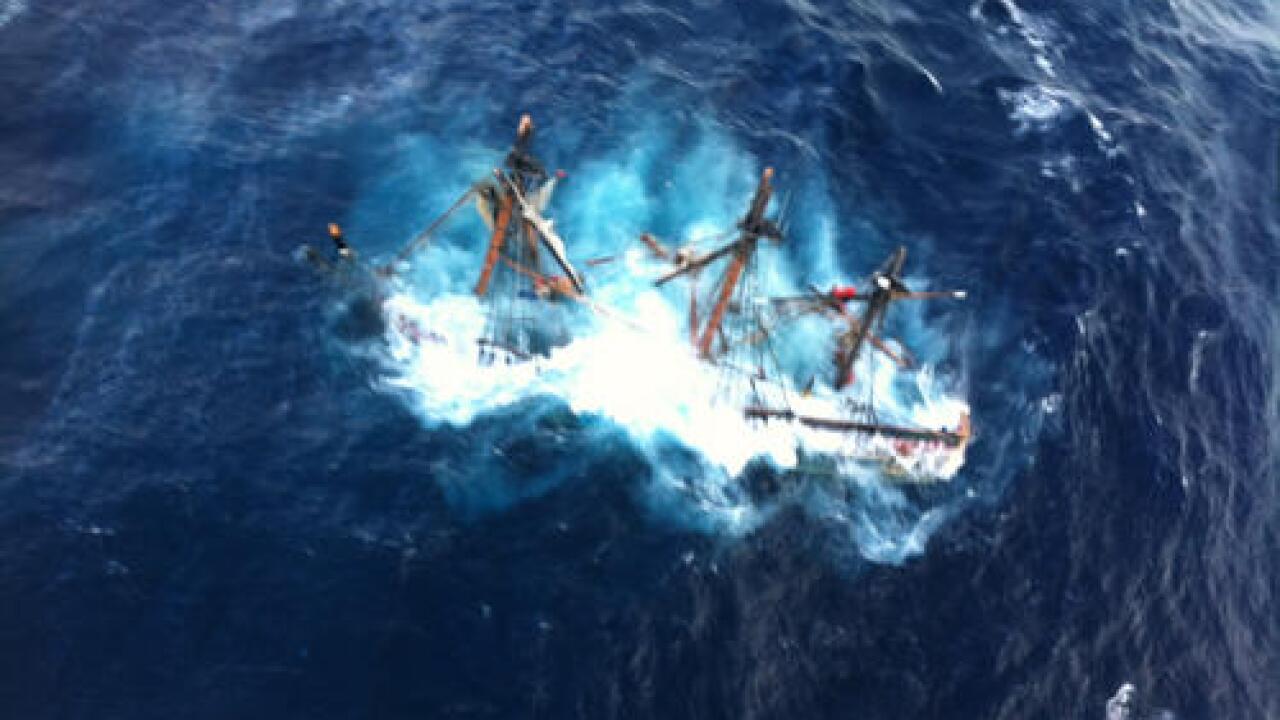 The HMS Bounty, a 180-foot sailboat, is shown submerged in the Atlantic Ocean during Hurricane Sandy approximately 90 miles southeast of Hatteras, N.C., Monday, Oct. 29, 2012. Of the 16-person crew, the Coast Guard rescued 14, recovered a woman and is searching for the captain of the vessel. U.S. Coast Guard photo by Petty Officer 2nd Class Tim Kuklewski.

UPDATE: The Coast Guard confirms they have recovered the body of Claudene Christian who was one of two crew members missing from the HMS Bounty. The Captain of the ship remains missing.

Portsmouth, Va. - The Coast Guard rescued 14 people from life rafts and is searching for two more who remain missing off of Hatteras after abandoning the tall ship HMS Bounty in Hurricane Sandy's rough seas.

The 14 were flown to Coast Guard Air Station Elizabeth City, N.C., where they were met by awaiting emergency medical services personnel at approximately 10:15 a.m. with no life threatening injuries.

Oklahoma woman one of the missing crew from the HMS Bounty

The vessel is reportedly sunk, but the mast is still visible.

The Coast Guard 5th District command center in Portsmouth subsequently received a signal from the emergency position indicating radio beacon registered to the Bounty, confirming the distress and position.

An aircrew from Coast Guard Air Station Elizabeth City launched aboard an HC-130 Hercules aircraft, which established communications with the Bounty's crew.

The first Jayhawk crew arrived on scene at approximately 6:30 a.m. and hoisted five people into the aircraft, and a second helicopter arrived and rescued nine people.

The vessel was reportedly taking on water and without propulsion.  On scene weather was reported to be 40 mph winds and 18-foot seas.

The Bounty is a replica of the original HMS Bounty, and was built in 1960 for the MGM movie version of Mutiny on the Bounty, which starred Marlon Brando. The Bounty has appeared in many films and documentaries, including Treasure Island, Yellowbeard, Sponge Bob, Square Pants, the Movie, and Disney’s Pirates of the Caribbean – Dead Man’s Chest.