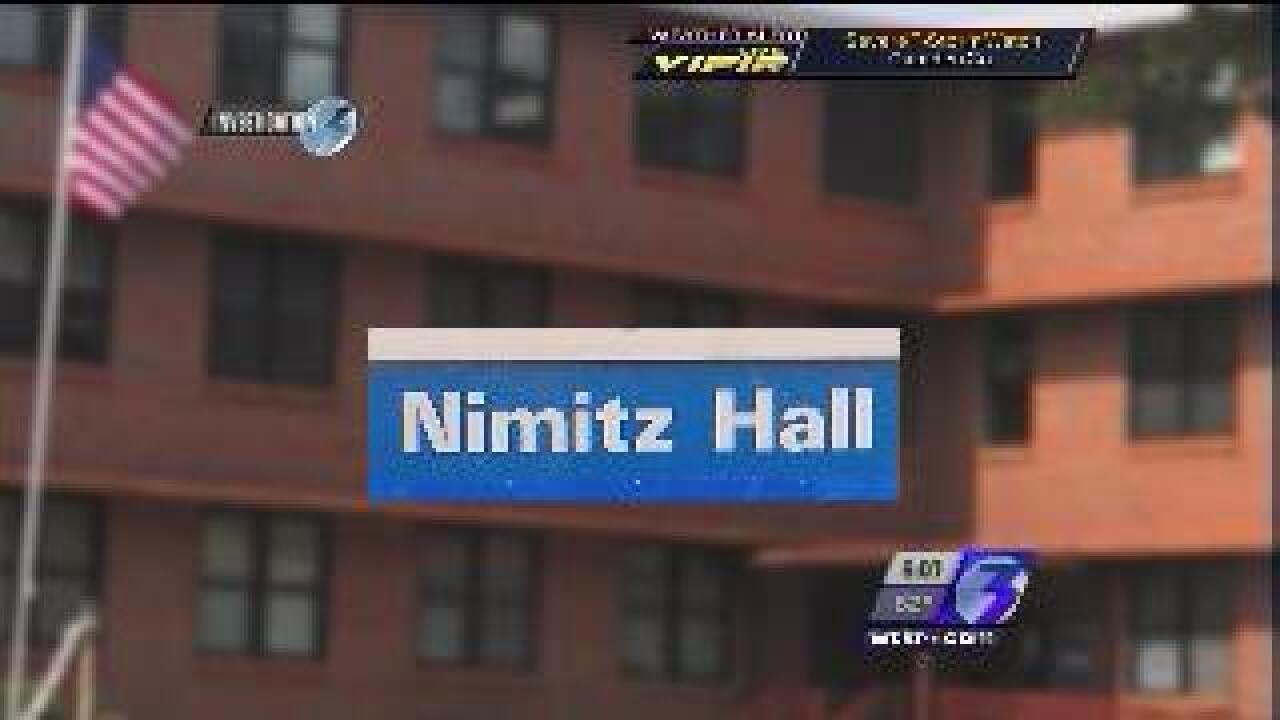 Over the years, though, it’s also been home to mold, and lots of it, according to tests from Navy industrial hygienists.

Federal employees who worked there say they were kept in the dark, and never told about what they were breathing in every day.

“It hurts very much that they knew this was going on, and with that information, refused to share it with us,” said Tracy Brown, a counselor at the Substance Abuse Rehabilitation Program, also known as SARP, located for almost 30 years inside building J-50.

“Majority of patients, when I was moved to this office, complained of some sort of illness,” said Brown.

Sailors and soldiers getting treatment for drug and alcohol addictions lived in the building for weeks during treatment, but staff had to work there for years.

“The digestive problems, sinus problems and headaches were bothering me tremendously,” said Brown.

Tracy went to the hospital on a regular basis, suffering illnesses like diarrhea, nausea, swelling of her joints, and difficulty breathing - missing over 600 hours of work in the process.

Neither she nor her doctors could ever figure out the cause.

Those answers finally came in March of 2011, when Tracy left work one day to be treated at Sewell's Point Branch Clinic, after she experienced red eyes, muscle spasms and nose bleeds during group therapy with her patients.

Tracy says when the doctor there learned she worked inside J-50, he told her of the history of the building's mold problems.

“He said we should have been moved out of the building, and some sort of remediation should have been done,” said Brown. “I was numbed, shocked, in disbelief. All my trust, every single thing I had, I felt like I was deceived.”

Tracy filed a formal complaint with Navy Human Resources, Occupational Health and the Department of Labor, saying that mold inside J-50 was making her sick.

The Navy responded to her complaint with mold tests performed on J-50 by base officials over the years.

The first test-- August 13th of 2009, when Navy industrial hygienist teams found high concentrations of mold on air vents, furniture, ceiling tiles, cabinets, and inside closets all around the building.

Less than a year later, in July of 2010, the Navy tested yet again...with the same results.
The findings were included in a Power Point presentation, put together by Lieutenant Commander Eric Pauli, the head of SARP at the time. See the Power Point.

In it, he says "Problems with mold and the broken HVAC system adversely affect health, comfort, and safety of staff, patients, and visitors."

He even points out the types of mold found in J-50 can "grow in human tissue, and for people with weakened immune systems, this growth can eventually be fatal."

“He knew about the mold, the high concentrations, and what it does to a human body? Why not warn us and tell us we are going to go through these things?’ said Brown.

Pauli also said “Cosmetic changes have occurred in the past including carpet installation, new furniture, paint and mold clean-up but have provided only short-term relief.”

According to the Power Point, "The situation has not been resolved through previous channels. We request support and involvement from upper leadership for both short-term and long-term options."

NewsChannel 3 doesn't know who saw his presentation dated July 27th, 2010, but Tracy says no action was taken by Navy Officials at the time.

The official reason for the move: So that SARP could be closer to the hospital if their patients needed medical treatment.

“I knew it was the mold, that’s the reason we were moving, but has it ever been said to us? No,” said Brown.

Even though the Navy has never publicly admitted to mold inside J-50, NewsChannel 3 uncovered a request for proposals, finally put out in November of 2011, asking for bids on a $10 million dollar contract to fix the building.

Nimitz Hall will be gutted down to its exterior walls to install insulation, which had never been in place before, as well as a completely new HVAC system - all things that Lt. Commander Pauli asked for years ago. The contract still has not yet been awarded by Naval Facilities Engineering Command.

Meanwhile, sailors and civilians in the Transient Personnel Unit, the Naval Military Processing Site, and the USO continue to work in the moldy building to this day.

“I am afraid, I feel for those personnel that are there,” said Brown. “I came forward because I want it to stop.”

Tracy just wants the Navy to be honest about mold to their workers, let them know when it is present in a building, and educate them on the effects, instead of sweeping it under the rug. She is still fighting to win her Worker’s Compensation Claim.

Navy Region Mid-Atlantic did send a formal statement to NewsChannel 3 before our story aired, responding to questions we asked last week. The email went into our server's junk folder, which was not checked before the story aired, and therefore, the responses were not included on TV. Here is the what they sent us, the same thing posted on the Naval Station Norfolk page.

The Navy is committed to the environmental health and safety of our military and civilian workforce and ensuring their quality of life is maintained:

- The Navy has been aware of recurring isolated mold issues and has acted each time they were reported to remediate and effect repairs when warranted.

- Personnel are encouraged to let their supervisors know about any concerns they have with their facilities or working environment.

- Personnel have been apprised of the issues and were instructed to be examined by occupational health personnel at the hospital, clinic or family physician if they thought they were affected by mold exposure.

SARP inpatients were housed in a separate wing of J-50, which was unaffected by mold:
- It is important to note that the problems in Building J-50 were primarily located in "A" Wing. The building itself was designed for open bay berthing; it was converted to office spaces to support SARP services. The HVAC system did not operate optimally under the new office configuration due to restricted air flow. The "A" wing of J-50, which was occupied by SARP until June 2011, has records of moisture and minor mold issues dating back to at least 2006, with reports of isolated issues mostly around air vents and on furniture during peak cooling season. Industrial hygienists report mold found on surface samples, but no indication of mold in air samples during each test.

- Building J-50 was surveyed by the Joint Commission in 2009 under the standards of Business Occupancy. The SARP program received full accreditation.

- Nevertheless, once space at Naval Medical Center Portsmouth was vacated by the relocation of Naval School of Health Sciences to San Antonio, SARP was moved in order to improve working conditions and proximity to hospital.

High concentrations on a surface sample do not equate to significant contamination throughout the facility:
- Mold tape samples are analyzed and results reported based on the concentration present on the tape. The sampled material generally covers an area of less than one inch square and is collected in the area of highest visible concentration.

- Therefore results of "high concentration" are in reference to the mold detected within that specific small area sampled.

- These sample results are not intended, and do not, represent concentrations of mold throughout the facility. The Industrial Hygienist interprets the sample results along with his or her observations during the walkthrough to determine the extent of the contamination in a facility.

- Ducting was also inspected and did not reveal mold. The "A" wing of J-50 that housed SARP has been empty for over a year. Other sections of the building are still in use; however they have a completely separate and more effective HVAC system due to better air circulation and have had far less issues. NAVFAC Mid-Atlantic is currently in the process of awarding an energy efficiency project that will replace the entire HVAC system throughout the building.

The photographs are from two offices that were locked and unoccupied for more than six months while the service members were on deployment.

- The photographs identified in the PowerPoint presentation were primarily from two defined spaces in the "A" Wing of J-50 and are not representative of the entire building. A lack of proper ventilation in these spaces with the doors closed and locked for the extended period of time are believed to have caused mold growth according to industrial hygiene personnel. When discovered upon service member's return, the mold was remediated immediately.

In Hampton Roads and older Navy facilities, mold remediation is an ongoing process:
- In spite of the challenges of older buildings, over-stressed HVAC systems, and fiscal constraints, the Navy’s has remained diligent and responsive to moisture and other building conditions conducive to growth of mold.

- Building 531 at NAS Oceana is another example of an older multi-use building housing SARP office, theater, FFSC, Navy College, NMCRS and the post office. Building 531's 2010 testing came back as not meeting "level of concern with regard to mold." Building 531 has a roof replacement project scheduled for September 2012. There have been no additional reports of mold.

This statement addresses several questions we sent the Navy, that didn’t end up airing on TV. We asked about Building 531 on Naval Air Station Oceana, because those mold tests were given to Tracy as part of the response to her claim.

The Navy says their 2010 tests in Bldg. 531 did not meet “level of concern with regard to mold.” But their October 2011 tests showed high counts of mold in one room, medium counts in another room. Navy industrial hygienists say in their report, “visible mold should be remediated,” and “coordinate the repair of structural issues which allowed for water incursions.”  See the report.

As for Building J-50, the Navy says it passed a survey by the Joint Commission in 2009 under the standards of Business Occupancy, and received full accreditation.

Looking at the July 2010 Power Point written by SARP’s Lt. Commander Pauli, though, tells a different story - he states the building will no longer meet Joint Commission Standards in its condition. See the Power Point.