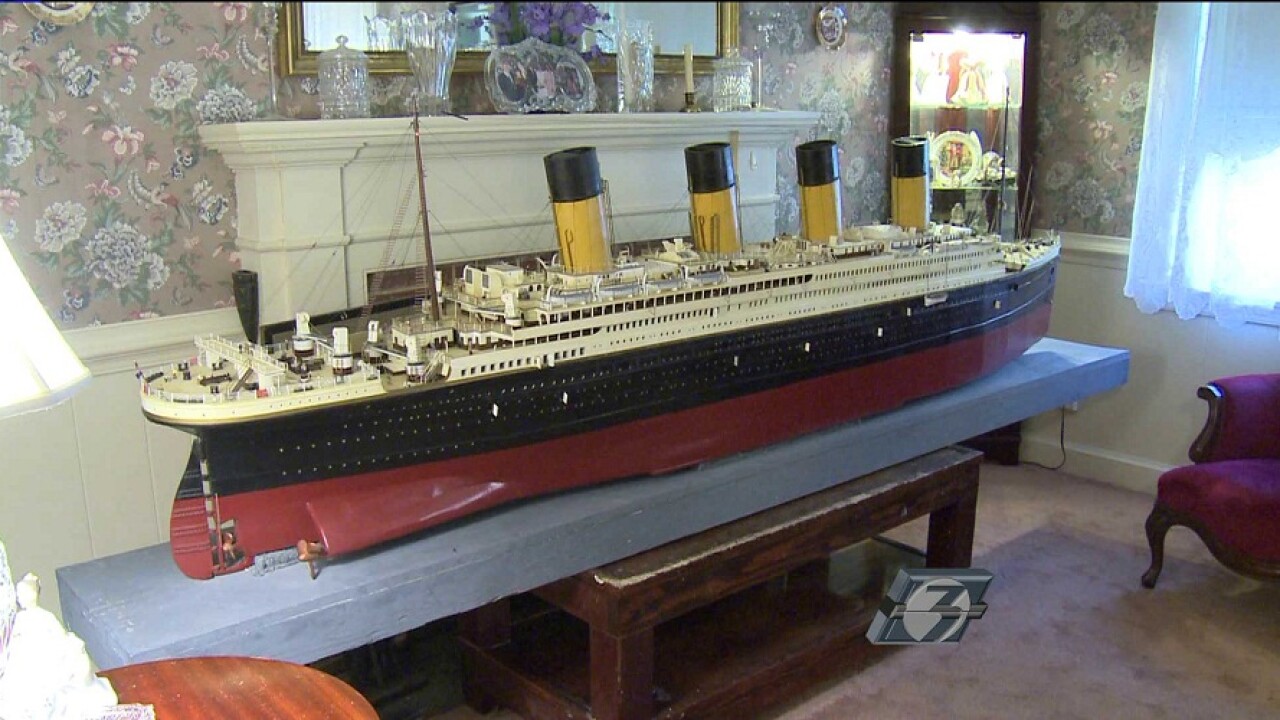 As for the skeptics who don’t quite see the image as a ghostly image: “suit yourself” says Chuck.

It’s been 100 years since the RMS Titantic struck an iceberg and sent more than 1,500 souls to their watery graves.

In 2004, a Portsmouth man completed a replica of the ship – nine feet long, weighing more than 200 pounds.

But according to the builder — the museum quality replica has recently acquired something that may now qualify it as a ‘ghost ship’. Who knows what lurks inside this replica of the ill fated RMS Titanic?

The builder told Barbara Ciara that you can’t see it with the naked eye, but he took a photograph of the boat that revealed what he thinks are two ghostly images.

"I couldn’t make it out until I looked at it very carefully and I found it was a bald headed man with a handle bar mustache, and I said to myself, what’s he doing there? Maybe it was someone that was aboard the Titanic that found a new home for himself.”

It took 17,368 hours and over nine years to build the replica. Chuck took on the project after seeing the old black and white 1958 movie ‘A Night to Remember.’

Chuck, a retired architectural draftsman, studied old photographs of the Titantic and began his quest to build a spitting image of the vessel.

"I got so engrossed in it I didn’t realize how much time goes by each day," said Chuck.

With painstaking detail, Chuck, wearing a special magnified glass attached to his glasses, used his special tools to freeze a moment in time on the replica.

He re-created life on the ship. Crewmen loading up an old Model-T. Children playing on the deck. Ladies in period clothing, socializing. Chuck even captured an image of a crewman walking dogs on the deck. History indicates that two of those dogs made on board life boats and survived the sinking.

But it wasn’t until Chuck shot a series of photographs of the replica to create a large photo composite, that he noticed something in the photos that couldn't be seen with the naked eye.

An unexplained image in the portholes just above the life boats - on the port side of the vessel. According to Chuck, it looks like a bald headed man with a handle bar mustache looking out. And he just recently identified a woman in one of the portholes appearing to lean forward to see the view.

Chuck doesn’t fear the images; he says, “I leave them alone and they leave me alone.” As for the skeptics who don't quite see the image as a ghostly image: “suit yourself” says Chuck.

The builder of the replica isn’t trying to convert anyone to buy into his ghostly tale, but he is interested in partnering with a musuem to display his replica so that more people can enjoy the ship he worked so hard to complete. It is a fascinating view, not to mention, his wife of 31 years would like to get that boat out of their living room.